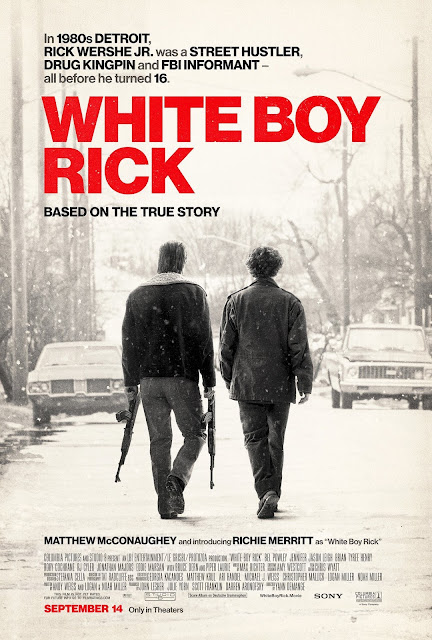 
If you're from Michigan, especially the Detroit area, then you already know the story of Rick Wershe Jr., AKA White Boy Rick. FBI informant at 14, cocaine kingpin by 16, & imprisoned at 17, receiving a longer sentence than many violent criminals. This is just about the perfect true story to inspire a film.

But White Boy Rick is ultimately nowhere near the level it should be. It should be wildly captivating, much like Goodfellas or Casino. But although it does have flashes of it, it's ultimately just below average. Set in 1980s Detroit, the film follows Rick Wershe Jr., (played by Richie Merritt), a 14-year-old kid living in a rundown neighborhood in Detroit. He lives with his gun-running father, Rick Sr., (played by Matthew McConaughey), & his drug-addicted sister, Dawn (played by Bel Powley). His grandparents, Roman (played by Bruce Dern) & Verna (played by Piper Laurie), don't live too far either, & always look down at their son & grandchildren's lives.

Rick Jr. goes to sell some guns one day, & the person purchasing them is local gangster Johnny Curry (played by Jonathan Majors). He eventually has Rick Sr. join his crew, & partners up with Johnny's brother, Rudell "Boo" Curry (played by RJ Cyler). While in the crew, he is coined with the nickname "White Boy Rick."

Some time later, the FBI comes to the Wershe household, asking about a gun purchase. While Rick Sr. refuses to tell them anything, Rick Jr. ends up becoming an FBI informant. His handlers, agents Alex Snyder (played by Jennifer Jason Leigh) & Frank Byrd (played by Rory Cochrane), & Detroit Police Department Narcotics Division Det. Mel Jackson (played by Brian Tyree Henry), supply him with crack to sell. This sends Rick Jr. into a way of life he never imagined.

When the FBI is done with him, Rick Jr. becomes a huge drug kingpin, getting himself involved with fellow drug kingpin Art Derrick (played by Eddie Marsan), & gets tied in with family of Detroit mayor Coleman Young & members of the Detroit Police Department. But Rick may have found himself in too deep of a hole to get out of.

The cast is excellent. Richie Merritt gives a great debut performance. He greatly portrays the insecurities of a young man in his situation. Matthew McConaughey gives a great performance as a conflicted & troubled father. And the rest of the cast, especially Powley, Leigh & Henry, do great jobs in supporting roles.

Yann Demange's direction is great. Although Demange does have some trouble handling all the many subplots occurring, he is able to demonstrate a lot of style & pull some great performances out of his cast.

The screenplay by Andy Weiss, Logan Miller & Noah Miller is very bad, & stops the film from being good. The plot has way too much going on & is not captivating enough, the characterization besides Rick Sr. & Rick Jr. is almost non-existent, & the dialogue is badly written.

And Tat Radcliffe's cinematography is amazing. Radcliffe's camerawork fits perfectly in the timeline of the film: it has that amazing 1980's neon look.

This is just a mediocre film. It does have some good performances, direction & visuals, but is sadly balanced out by a bad screenplay. As a film fan & as a Detroiter, I was very disappointed.

White Boy Rick was seen by me at the MJR Marketplace Digital Cinema 20 in Sterling Heights, MI on Saturday, September 15, 2018. It is in theaters everywhere. Its runtime is 111 minutes, & it is rated R for language throughout, drug content, violence, some sexual references, & brief nudity.
at September 23, 2018