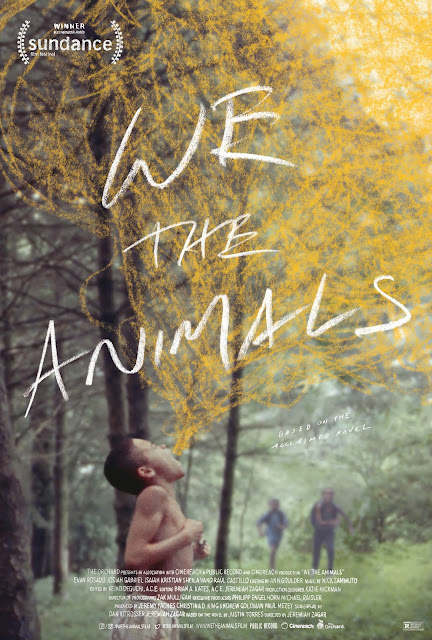 
I've been drawn to many films lately that have a very aimless, wandering structure that tells more of a story. A lot of these films have come out of the mumblecore subgenre, including LOL, Nights & Weekends, & Hannah Takes the Stairs. However, the most seminal film in recent memory with this aimless structure was The Florida Project, which was one of the best films of last year.

We the Animals, while not perfect, is another good film with a wandering structure. Based on the 2011 novel We the Animals by Justin Torres, & set in 1980s upstate New York, the film follows Jonah (played by Evan Rosado), a 10-year-old who is the youngest of 3 brothers. His older brothers are Manny (played by Isaiah Kristian), who is probably around 13, & Joel (played by Josiah Gabriel), who is probably around 12. They live with their mom, Ma (played by Sheila Vand), & their dad, Paps (played by Raúl Castillo) in a small house in a very rural area.

They get by from the small jobs the parents have: Ma works at a factory where she bottles beverages, & Paps works as a security guard. At home, it's more complicated: Ma & Paps are constantly fighting, & Manny & Joel are belittling Jonah.

As Jonah gets older, his environment is continuously being shifted through the belittling he receives from his brothers, & the fighting between his parents, with Ma refusing to get up & Paps leaving the house. Eventually, Jonah tries to figure out his future by himself.

The cast is excellent. The cast is filled with actors who are either completely or almost completely unknown, & they all make their indelible marks on the film. Evan Rosado is a revelation. Through his narration, Rosado shows a burgeoning wiseness beyond his years. The rest of the cast also do great jobs, but Rosado stands out.

Jeremiah Zagar's direction is great. Although Zagar does have some trouble keeping the film on course, he captures the events with an engrossing, gritty, & almost-documentary-like eye.

The screenplay by Jeremiah Zagar & Dan Kitrosser is very good. The plot is a bit too aimless & wandering at times, but the realistic characters & the humanistic dialogue save the film.

This is a good piece of cinema. Although it does come off the tracks & is it a bit too aimless, it is saved by great performances & some amazing cinematography.