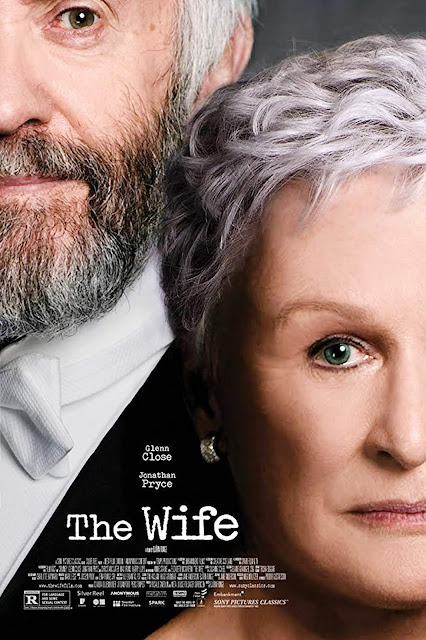 Behind the many great male artists in history is a better wife. Almost never in the spotlight, the wife supports their husband while sadly never receiving credit. But what if the wife has had enough of her husband's overblown ways?

The Wife shows what can happen in that instance, & it is one of the best-acted films of the year. Based on the 2003 novel The Wife by Meg Wolitzer, & set in 1992, the film follows Joan Castleman (played by Glenn Close), the long-suffering wife of former literature professor & award-winning writer Joseph Castleman (played by Jonathan Pryce). Their daughter, Susannah (played by Alix Wilton Regan) is about to have a son, & their son, David (played by Max Irons), is a struggling writer. Once a writer with great talent, Joan has pushed that aside long ago in favor of supporting Joseph's long career.

One morning, Joan & Joseph are woken up by amazing news: Joseph is going to receive the Nobel Prize for Literature in Stockholm. They are absolutely elated. While they are at a party celebrating Joseph's achievement, David tries to get Joseph's opinion on his short story, but David keeps dodging the question.

On the plane to Stockholm, Joan & Joseph are confronted by Nathaniel Bone (played by Christian Slater), an author who keeps pestering Joseph about writing his biography. When they arrive in Stockholm, Joseph is being kept up in all the hectic events preluding the ceremony, while Joan mainly stays in her hotel room.

One day, while Joseph is out, Joan sits in the hotel café with Nathaniel, who tells her he knows about Joseph's numerous infidelities. However, Joan brushes this off in front of him. Eventually, this sends Joan into flashbacks of when she first met Joseph in 1959, when a young Joan (played by Annie Starke) had a young Joseph (played by Harry Lloyd) as her literature professor, while he was married with a daughter. Their affair started around the time they met author Elaine Mozell (played by Elizabeth McGovern). This forces Joan to rethink her life choices, as Nathaniel says he knows an interesting fact about Joseph that will really change things.

And Jane Anderson's screenplay is amazing. Anderson does a terrific job of adapting the novel, keeping the great plot, the intriguing characters, & the sharp dialogue that made the novel so great.

This is one of the best films of the year. It has some great directing & writing, but above all, it has 2 great performances from 2 of the best actors of their generation.