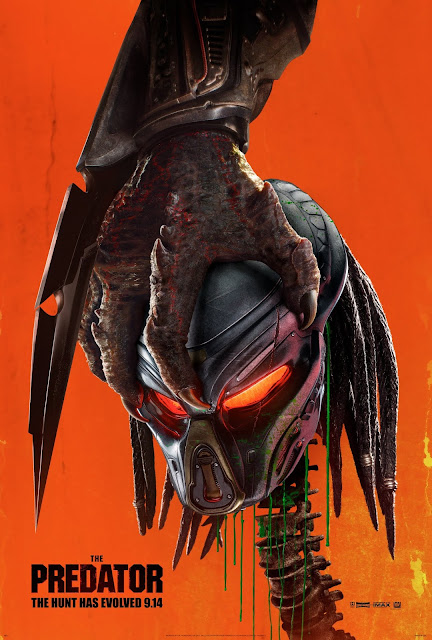 
A lot of people are tired with all of these franchise prequels & sequels & reboot & revivals. And honestly, I get it. There's too many of these films flooding the market today. Some of them are good or even great, but a lot of them aren't. They're just driven by money. It would be nice to see more original films getting the top spots in the box office, or films that aren't adapted from some major book series or TV series or other forms of media.

The Predator is definitely nowhere near a masterpiece, but it's a schlocky, fun, & thrilling blockbuster. The fourth film in the Predator franchise, the film follows Quinn McKenna (played by Boyd Holbrook), an Army Ranger sniper. While on a hostage retrieval mission, a spaceship crashes nearby, the ship containing a Predator. Quinn is able to stop the Prdeator & sends its armor off.

However, soon after, Quinn is captured by government agent Will Traeger (played by Sterling K. Brown). Traeger also takes the Predator in as well to a lab in order to perform observation & experimentation, & calls in biologist Dr. Casey Bracket (played by Olivia Munn) to study it. After some observation, the Predator wakes up, breaks out of its bonds, kills several lab workers, & escapes, but not before sparing Bracket.

Quinn is sent on to a bus with several government captives: Gaylord "Nebraska" Williams (played by Trevanté Rhodes), an ex-Marine; Coyle (played by Keegan-Michael Key), a veteran; Baxley (played by Thomas Jane), a veteran with Tourette syndrome; Nettles (played by Augusto Aguilera), an ex-helicopter pilot; & Lynch (played by Alfie Allen), another ex-Marine. After some banter on the bus, they see the Predator escape from the lab, & take over the bus, eventually bringing Bracket with them.

They return to the home of Quinn's ex-wife, Emily (played by Yvonne Strahovski), & their son, Rory (played by Jacob Tremblay), who has autism. Now, the group of soldiers, along with Rory & Bracket, must stop the Predator once & for all.

The cast is excellent. Boyd Holbrook shows that he can hold his own & demonstrates command in the lead role. Jacob Tremblay continues to show that he is the best young actor in the film industry. And Key, Rhodes, & Allen provide great comic relief.

Shane Black's direction is great. Black does come into trouble when it comes to rushing the action, but he does show a lot of control in the very good (& very bloody) action sequences.

And the screenplay by Shane Black & Fred Dekker is good. The plot is definitely messy (& rushed in the third act), & the characterization is also flawed (especially the portrayal of autism), but the dialogue is fantastic. Black can do no wrong when it comes to dialogue, as it's always hilarious & delightfully schlocky.

This is a good blockbuster. It's definitely flawed, but the great cast & the excellent dialogue save the film from being a total mess.

The Predator was seen by me at the MJR Marketplace Digital Cinema 20 in Sterling Heights, MI on Friday, September 14, 2018. It is in theaters everywhere. Its runtime is 107 minutes, & it is rated R for strong bloody violence, language throughout, & crude sexual references.
at September 19, 2018