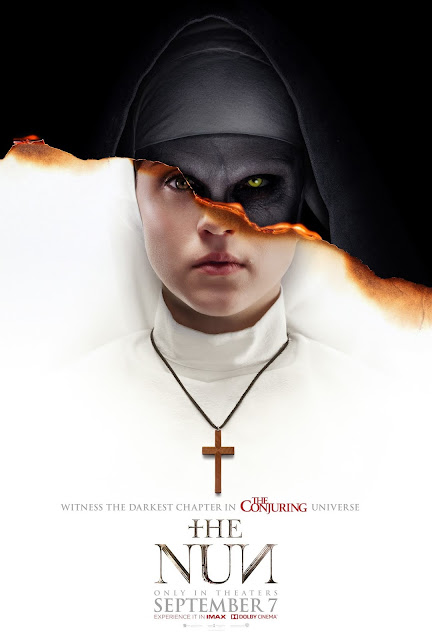 Horror films involving demonic possession have been around for years. The Exorcist, Rosemary's Baby, & Paranormal Activity have all been seminal additions to this part of the horror genre.

The Nun is definitely not on the level of the films mentioned above, but it's a good horror film that has a lot of well-timed scares in it. Set in 1952 Romania, the film follows Sister Irene (played by Taissa Farmiga), a nun in a novitiate. She is called by the Vatican to go to the Cârta Monastery in Romania after 2 nuns were attacked by a demon, Valak (played by Bonnie Aarons), & one of the nuns killed herself as a result. Irene is sent along with Father Burke (played by Demián Bichir) to the monastery. When they arrive, they are met by Frenchie (played by Jonas Bloquet), a villager who delivers supplies to the abbey. Frenchie was the one who first discovered the body of the nun who killed herself.

While they try to investigate, Irene & Burke stay at the convent, while Frenchie returns to the village. There, they each reveal deep thoughts: Irene saw visions as a young girl, & Burke is haunted by the death of a child on which he performed an exorcism.

Eventually, during their time there, many mysterious things occur & become more & more ominous & more & more frequent. This is all caused by Valak. Irene, Burke & Frenchie must stop Valak before Valak possesses someone else in the abbey.

The cast is excellent. Taissa Farmiga gives an amazing scared-as-hell performance. If she continues on after this, she'll be right behind her sister, Vera Farmiga, as a scream queen in Hollywood. Demián Bichir also gives a great performance, continuing to fly under the radar.

Corin Hardy's direction is great. Although Hardy focuses too much on jump scares, he is able to overcome that with a very ominous atmosphere, & when the jump scares hit, they hit hard.

Gary Dauberman's screenplay is very good. The narrative is formulaic, but the plot is intriguing, & the dialogue is also formidable.

This is a good horror film. While it does rely too much on jump scares & is a bit too formulaic, it is saved by great performances & excellent cinematography.

The Nun was seen by me at the MJR Marketplace Digital Cinema 20 in Sterling Heights, MI on Friday, September 7, 2018. It is in theaters everywhere. Its runtime is 96 minutes, & it is rated R for terror, violence, & disturbing/bloody images.
at September 17, 2018