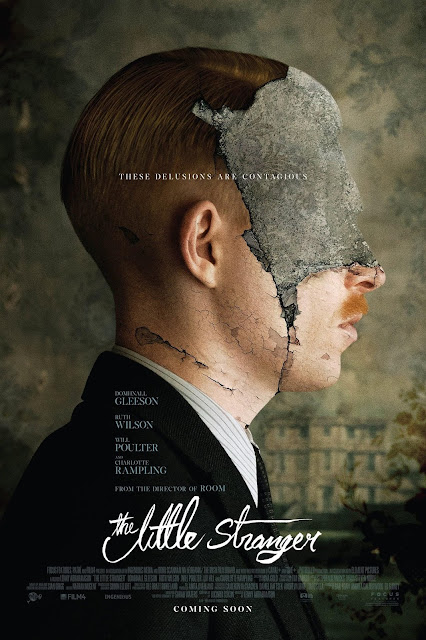 
Gothic horror is a subgenre that has never really caught on with audiences, even though they may be extremely well-received by critics. For the mainstream crowd, however, it's not scary enough for the majority of them. However, it has intrigued me a bit, even though I've never seen one. I've heard 1977's Suspiria is fantastic, & 2015's Crimson Peak is very good.

The Little Stranger is a film that I was very intrigued by, considering that the cast is very talented, & director Lenny Abrahamson's previous film, 2015's Room, was one of the best films of that year. And I was excited to see him go in a different direction. However, this attempt at gothic horror, aside from a few things, is a major disappointment. Based on the 2009 novel The Little Stranger by Sarah Waters, & set in 1948 Warwickshire, England, the film follows Dr. Faraday (played by Domhnall Gleeson), a doctor of rural & humble beginnings. He has worked very hard to get to his current status.

One day, he is called to Hundreds Hall to look at Betty (played by Liv Hill), the young house maid. This is not the first time Faraday has been there, as he had previously been there in July 1919, where Faraday, jealous of the family's social status, broke off an acorn from a display. The Hall is now owned by Roderick Ayres (played by Will Poulter), a war hero who is now badly disfigured after serving with the Royal Air Force. Also living there are Roderick's sister, Caroline (played by Ruth Wilson), & their mother, Angela (played by Charlotte Rampling). The Hall is now in major decay & the Ayres are in dire financial need.

Faraday continues to return to the Hall periodically, & eventually tries to start a romance with Caroline. But something starts to happen in the household. Many unexplained incidences start to occur, with the Ayres believing it is of a supernatural nature. But Faraday is skeptical, as the situations begin to get worse.

The cast is great. Gleeson does a great job. Wilson gives the best performance of the cast. Poulter is turning out to be a good dramatic actor. And Rampling adds another good performance to her long & storied career.

Lenny Abrahamson's direction is underwhelming. Although Abrahamson does a great job of building tension, he can never deliver on it, allowing for no catharsis whatsoever.

Lucinda Coxon's screenplay is very muddled. The plot is intriguing at first glance, but the narrative leaves too many important questions unanswered, making the audience extremely confused in the process. And the characterization is not good, as the characters feel terribly bland.

And Simon Elliott's production design is excellent. The sets are very elegant & period-accurate, yet has a very eerie quality to it.

This is a very disappointing film. Although it does have some good performances & visuals, the direction can't deliver on the tension, & the screenplay is too confusing & uninteresting to make a mark.

The Little Stranger was seen by me at the AMC Forum 30 in Sterling Heights, MI on Sunday, September 2, 2018. It is currently in 4 theaters in the Detroit area: the AMC Forum 30 in Sterling Heights, MI; the AMC Livonia 20 in Livonia, MI; the Emagine Novi in Novi, MI; & the MJR Southgate Digital Cinema 20 in Southgate, MI. Its runtime is 111 minutes, & it is rated R for some disturbing bloody images.
at September 03, 2018