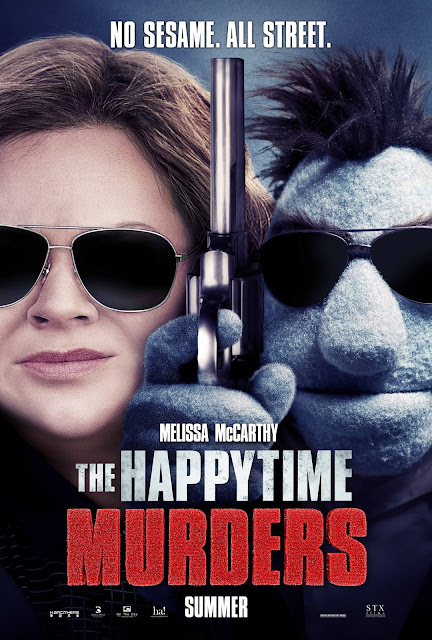 Too many comedies these days rely on a huge amount of shock humor, mainly of the sexual variety. Some can do this humor right, like Judd Apatow, but many of these attempts fall very flat.

The Happytime Murders should've done this right. However, aside from a few truly funny moments, it fails. The film follows Det. Connie Edwards (played by Melissa McCarthy), a detective for the LAPD. Edwards works in a world where humans & puppets co-exist, but puppets are harshly discriminated against. Her puppet ex-partner, Phil Phillips (voiced by Bill Barretta), now works as a private eye with his human secretary, Bubbles (played by Maya Rudolph). Edwards & Phil had a falling out twelve years earlier after Phil accidentally killed an innocent puppet bystander while trying to shoot an assailant.

While working on a case, Phil goes into a puppet porn shop for evidence. While he is in there, someone kills the rest of the people in the shop. One of the deceased is Mr. Bumblypants (voiced by Kevin Clash), an actor who was on the 1990s show The Happytime Gang, about a group of puppets living with a human. The show featured Lyle (voiced by Kevin Clash); Goofer (voiced by Drew Massey); Ezra (voiced by Ted Michaels); Cara (voiced by Colleen Smith); Larry Shenanigans Phillips (voiced by Victor Yerrid), who is also Phil's older brother; & Jenny Peterson (played by Elizabeth Banks), the only human member of the cast & Phil's ex-girlfriend. The show is about to head into syndication.

That night, after meeting with Phil earlier, Larry Shenanigans is killed by a pack of dogs. After this, at the request of Lt. Banning (played by Leslie David Baker), Phil & Edwards team up once again. Although they are still angry at each other, they try to put their personal issues aside in order to solve the case. But when more of the cast is killed, & when FBI Agent Campbell (played by Joel McHale) gets involved, Edwards & Phil must pull out all the stops to find the killer before the whole cast is murdered.

The cast is the only bright spot of the film. Melissa McCarthy does a fine job, & she elicits a few laughs. The rest of the human cast, especially McHale & Baker, does a fine job as well. And the voice cast does a good job.

And the screenplay by Todd Berger & Dee Austin Robertson is awful. The film was supposed to be a dark comedy that satirized the classic neo-noir films of the 1970s & 1980s. However, the film in its current form is just a needlessly raunchy comedy with some crime elements thrown in. As a result, the plot is very uninteresting. The characters are also walking cliches; the dialogue, aside from a few moments, is basically humorless; & the racism allegory is very tone-deaf.

This is a major disappointment. Although there are a few funny moments, everything else about this film is a mess, only showing glimpses of what it could've been.

The Happytime Murders was seen by me at the MJR Marketplace Digital Cinema 20 in Sterling Heights, MI on Saturday, August 25, 2018. It is in theaters everywhere. Its runtime is 91 minutes, & it is rated R for strong crude & sexual content & language throughout, & some drug material.
at September 01, 2018