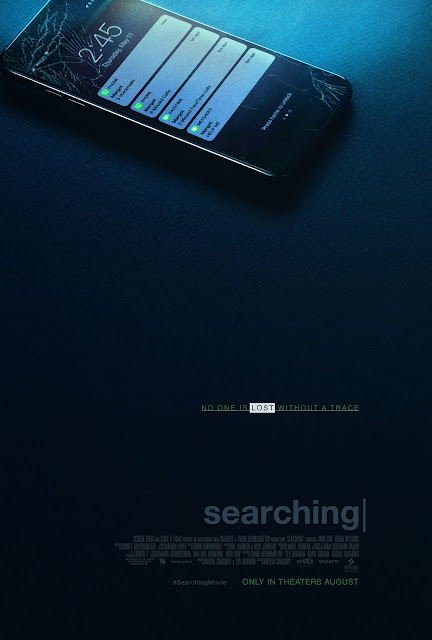 
The Internet is a powerful force. Some use it for good, others bad. But many of us don't know what others do behind a computer screen. For many, their real life is vastly different than their Internet life.

Searching finally shows the real consequences & dangers of the Internet, & it is one of the biggest surprises of the year. The film follows David Kim (played by John Cho), a single father in the San Francisco Bay Area. Since his wife Pamela (played by Sara Sohn) died from cancer a few years prior, he & his daughter Margot (played by Michelle La) have drifted further & further apart.

One night, Margot goes to a study group for the night, &, as is normal at the time, doesn't answer David's call. However, while he sleeps, Margot calls him 3 times. In the morning, David notices the calls but brushes off his concerns. Later, he thinks Margot is at one of her piano lessons, but when he calls the instructor, he is told that Margot cancelled piano lessons 6 months prior, & has put the money for them into a now-deleted Venmo account. The next day, David calls the mother of one of Margot's friends. She says they went on a camping trip & will tell her son to call him; however, the friend tells David that she never showed up.

Here, David decides to report Margot as missing, & his case is assigned to Det. Sgt. Rosemary Vick (played by Debra Messing), a decorated member of the Silicon Valley Police Department. While Vick & her team handle the ground investigation, she suggests that David handle part of the investigation at home.

David then notices Margot left her laptop at home. He then successfully logs in to some of her social media accounts, & tries to contact some of her friends. He finds out that Margot wasn't as social as he thought, & was only invited on the trip & to the study group out of pity. As David tries to find Margot, he finds many things about her that he never would've thought possible.

The cast is fantastic. John Cho shows such immense acting power, & after this & his great performance last year in Columbus, proves himself as a very underrated actor. And Debra Messing has done her best work since Will & Grace.

Aneesh Chaganty's direction is phenomenal. Chaganty keeps the suspense so high that it is reminiscent of some of the best thrillers of all time. And the use of the film being completely shown through smart phones & computer screens adds to the suspense, & doesn't feel like a gimmick. The fact that you're seeing the action from very small 5-inch & 13-inch screens adds a claustrophobic feel to the already-tense nature of the film.

And the screenplay by Aneesh Chaganty & Sev Ohanian is brilliant. The plot is so intricate & full of twists, the characters are fully realized, & the themes are well-thought-out, & well-touched upon.

This is one of the best films of the year. It's a really groundbreaking film, & it's a thriller of such immense importance & intensity.

Searching was seen by me at an advance screening at the MJR Troy Grand Digital Cinema 16 in Troy, MI on Thursday, August 23, 2018. It is now in theaters everywhere. Its runtime is 102 minutes, & it is rated PG-13 for thematic content, some drug & sexual references, & for language.
at September 01, 2018