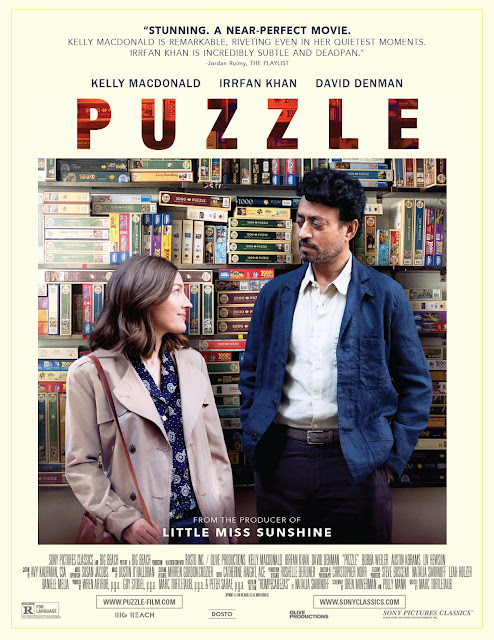 Many of us are still stuck in an old way of life, waiting & yearning to break free of their long-held restraints. But many of us won't know when that day will come or how it will come.

Puzzle, though flawed, is a good portrayal of someone who is breaking free of those restraints. A remake of the 2010 film Rompecabezas, the film follows Agnes (played by Kelly Macdonald), a long-suffering wife living in New Jersey. After helping her father since her mother died, & still living in the same house she grew up in, Agnes is still stuck in a very old-fashioned mindset. She is taken for granted by her husband, Louie (played by David Denman), & her two sons, Ziggy (played by Bubba Weiler) & Gabe (played by Austin Abrams). Also, Gabe's vegan girlfriend, Nicki (played by Liv Hewson), is not much help either.

For her 40th birthday, Agnes receives 2 major presents: an iPhone, which she isn't really that enthused by; & a 1,000-piece puzzle, which she is very happy to have received. She completes in a very short time, unpieces it, & completes it again. Elated by the puzzle, Agnes calls the person that gave her the puzzle & asks where she got it from. After that, Agnes buys a train ticket to New York City to find the puzzle store. After she purchases 2 more puzzles, she notices a sign in the store. The sign is from someone who is desperately seeking a new puzzle partner, asking them to text them if interested.

Agnes texts the person, saying she might be good at this. The person responds back & asks to meet her. The person is Robert (played by Irrfan Khan), an avid puzzler whose wife has just left him. Agnes tells everyone else that she is helping a relative who broke her leg as a guise for puzzling.

Although they clash a bit at first over puzzle strategies, Agnes & Robert eventually build a strong companionship. Robert realizes that Agnes is great at puzzles, & he thinks that they could possibly go far in an upcoming puzzle competition.

Agnes starts to change & break out of her shell, which puzzles (pun intended) those closest to her, especially Louie, who is very confused by this. Agnes is now learning to be more independent, but the ways she does it may start to throw everything out of place.

The cast is amazing. Kelly Macdonald shows that she can handle a lead role very well, & plays her character's quirks so well. Irffan Khan brings a lot of subtlety to his role. And the rest of the cast does an excellent job.

Marc Turtletaub's direction is great. Although he does have a trouble with the tone to start off, he overcomes this by keeping the film light & warm-hearted.

And the screenplay by Oren Moverman & Polly Mann is very good. Although the plot is a bit formulaic & the characterization is a bit underwhelming, the dialogue saves the screenplay with its realism.

This is a good understated film. Although there are definitely some flaws, the cast, especially Kelly Macdonald, saves the film.