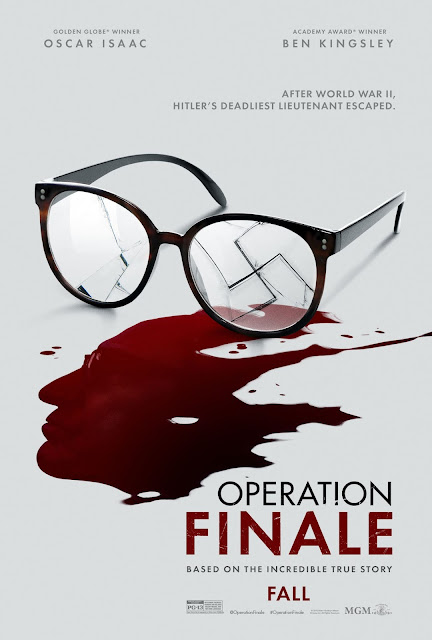 
In the years after World War II, many Nazis, not wanting to take responsibility for their heinous crimes, fled Germany to other countries in order to escape prosecution. The vast majority of them, some very notorious, went to South America, particularly Argentina.

Operation Finale, while not perfect, is a very good & very tense thriller about the real-life hunt for one of the most notorious Nazis ever. Set in 1960, the film follows Peter Malkin (played by Oscar Isaac), an agent for the Mossad in Tel Aviv. Although he left Germany before the Holocaust, his older sister & her three children did not leave, & were eventually murdered.

One day, word reaches the Mossad offices that Adolf Eichmann (played by Ben Kingsley), a Nazi SS-Obersturmbannfuhrer & one of the major organizers of the Holocaust, has been found in Argentina, just outside Buenos Aires. They have heard of this from Lotar Hermann (played by Peter Strauss), a blind Jewish refugee, whose daughter, Sylvia (played by Haley Lu Richardson), had been briefly dating Adolf's son, Klaus (played by Joe Alwyn). At the request of Mossad head Isser Harel (played by Lior Raz) & then-Israel Prime Minister David Ben-Gurion (played by Simon Russell Beale), Malkin will lead a team of Mossad agents to go to Argentina to capture Eichmann & bring him back to Israel for trial.

They lock him up in the safe house, with someone watching Eichmann at every second for every day until they return to Israel. But this will prove to be the most trying part of their caper.

Chris Weitz's direction is excellent. Weitz is able to let the events slowly unfold before us & keep the tension building & at a high level.

Matthew Orton's screenplay is great. Although the characterization is a bit weak for the supporting characters, the plot is thoroughly intriguing, & the dialogue is very well-written.

And Alexandre Desplat's score is phenomenal. Desplat, one of the best film composers of his era, delivers another great score, driven by an immense orchestra.

This is a very good thriller. Although it does have its weak moments, it definitely overcomes those flaws with great acting, very good direction, & a fantastic score.

Operation Finale was seen by me at the MJR Troy Grand Digital Cinema 16 in Troy, MI on Wednesday, August 29, 2018. It is in theaters everywhere. Its runtime is 122 minutes, & it is rated PG-13 for disturbing thematic content & related violent images, & for some language.
at September 02, 2018