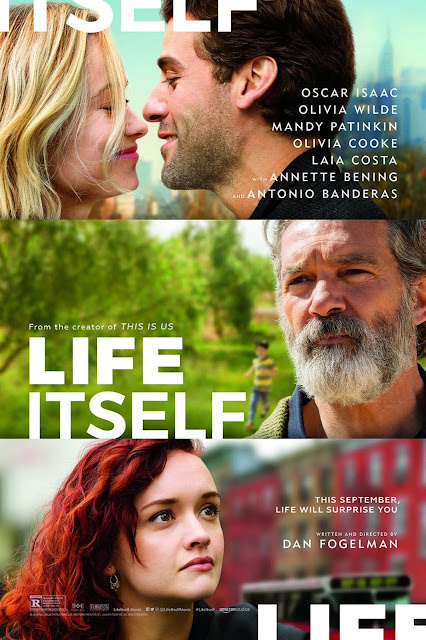 I just don't know what to say. Some films can do that to you. Some because of how good they are, & other times because of how bad they are. This is one of the latter times.

Life Itself is a putrid, manipulative, & unintentionally funny mess. Set between New York & Spain in the past, present, & future, the film follows Will Dempsey (played by Oscar Isaac), a hopeless romantic. At college, he meets Abby (played by Olivia Wilde), who he instantly falls in love with. After introducing her to his parents, Irwin (played by Mandy Patinkin) & Linda (played by Jean Smart), Will & Abby get married, & have a daughter, Dylan (played by Olivia Cooke). Also involved in this is Will's therapist, Dr. Cait Morris (played by Annette Bening). But Will & Abby might not be as happy in their marriage as they seem.

Another storyline involves Javier González (played by Sergio Peris-Mancheta), who is hired as a manager by Vincent Saccione (played by Antonio Banderas), a wealthy olive farmer in Spain. They strike up a friendship, & Javier ends up marrying Isabel (played by Laia Costa), & have a son, Rodrigo (played by Alex Monner). But Javier & Vincent come to an impasse as Vincent becomes interested in Isabel.

Eventually, these storylines will all coalesce together in some roundabout way, showing us how life can surprise us at any moment.

Dan Fogelman's direction is awful. Fogelman puts way too much material into this film, basically putting 2 seasons of This is Us into a 2-hour film. And he fails miserably at this. He can't focus on anything, as he bounces between storylines with so much confusion.

And Dan Fogelman's screenplay is a catastrophe. The plot is a mess, killing off more characters than the Red Wedding in Game of Thrones. The characters are nothing but inhuman clichés. And the dialogue is over-sentimental & unintentionally hilarious.

This is the worst film of the year, & one of the worst films ever made. It has nothing of value to it, & we would all be better off if this film never existed.

Life Itself was seen by me at the MJR Partridge Creek Digital Cinema 14 in Clinton Township, MI on Saturday, September 22, 2018. It is in theaters everywhere. Its runtime is 118 minutes, & it is rated R for language including sexual references, some violent images & brief drug use.
at September 30, 2018