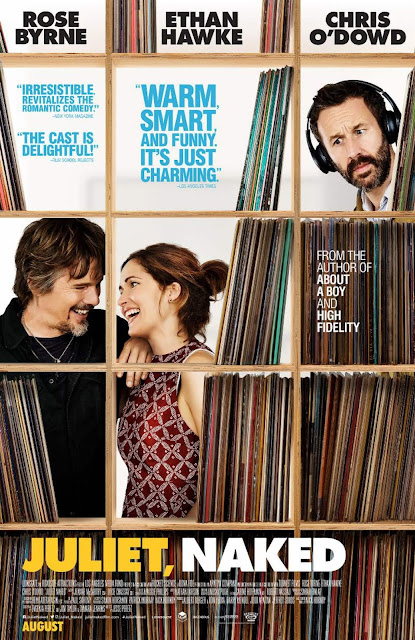 All of us, no matter who or what we are, love & adore music, in some way, shape, form, or genre. There's always a song we can sing to, or an artist we can love, or an album we can listen to over & over again.

Juliet, Naked, aside from a couple flaws, is a great comedy about music & the way it affects our lives. Based on the 2009 novel Juliet, Naked by Nick Hornby, the film follows Annie (played by Rose Byrne), a woman living in Sandcliff, a small coastal town in England. Her long-time boyfriend, Duncan (played by Chris O'Dowd), is a fan of alternative rock singer Tucker Crowe (played by Ethan Hawke). Tucker, once a promising artist after the release of his 1992 album Juliet, disappeared off the face of the earth after leaving a concert early by escaping through the bathroom in Minneapolis in 1993.

Duncan obsesses over Tucker, having listened to his album probably hundreds of times, has created a fan site, & frequently Skypes with other fans of Tucker. However, Annie is not a fan of Tucker, & is irritated by Duncan's obsession.

One day, Duncan receives a CD called Juliet, Naked. It is a CD of Tucker's original demo recordings from Juliet. Annie listens to part of it first, as she opened up the package it came in. Duncan then listens to it, &, to no surprise, hails it as a masterpiece. Annie, on the other hand, does not like it one bit. The next day, she comments on the message board on Duncan's fan site, calling the compilation "a naked attempt to squeeze a few quid out of a dead career."

Not long after, Annie receives an email from Tucker Crowe himself, saying "Bingo. You nailed it. Couldn't have said it better myself." After this email, Annie & Tucker continue to correspond through email, where Annie finds more & more about Tucker: he lives in the garage of his latest ex-wife; he has multiple children with different women; & he lives in New York.

Eventually, Annie gets the courage to dump Duncan after his incessant criticizing of her opinion about Juliet, Naked. Not soon after. Tucker decides to go to London for the birth of his grandson, & decides to meet her there. After a few days there, they go back to Sandcliff, where they continue developing their friendship into something more. But when Duncan notices Tucker is in town, everything gets thrown for a whim.

The cast is excellent. Rose Byrne is so charming & full of warmth. Chris O'Dowd is absolutely hilarious. And Ethan Hawke just keeps on proving himself as one of the best actors of his generation.

Jesse Peretz's direction is great. Although he hits a few speed bumps when it comes to tonal shifts, he is able to overcome them with a surfeit of warmth throughout.

And the screenplay by Evgenia Peretz, Jim Taylor & Tamara Jenkins is amazing. They do a fantastic job at adapting the novel, keeping the amazing characters & Hornby's trademark wit & making it feel fresh.

This is a great romantic comedy-drama. Although there are a couple minor flaws, they're overcome by some charming performances & a witty screenplay.