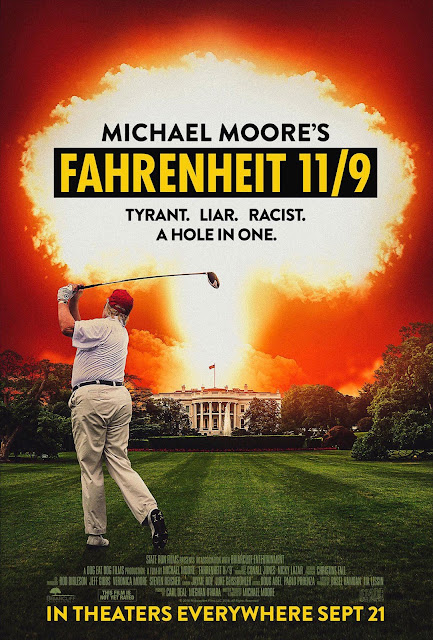 It should've never come to this. Our country should not be in the state it is today. Donald Trump shouldn't be our leader. He shouldn't be making a mockery of this country & spouting more & more stupid statements. Our members of Congress shouldn't be supporting the steps he takes & compromising with him. And his followers shouldn't be blindly following him as he leads us to a dark place ahead.

But, unsurprisingly, that's where we are today. Donald Trump is our leader. He lies, makes racist comments, commits treason, & does absolutely deplorable things, making us the laughing stock of the world. It shouldn't have come to this for us to wake up, but I'm not surprised that it did.

Fahrenheit 11/9 is a biting, horrifying, & altogether masterful documentary for our times. The film follows our favorite liberal muckraker Michael Moore as he explores how we got here & how we get out. He starts off with a conspiracy theory that may sound bizarre, but at this time, truth is stranger than fiction. In 2015, Donald Trump is riding high as host of The Apprentice. But something is making Trump mad: Gwen Stefani is making more money as a judge on The Voice than he is as the host of The Apprentice. So he decides to make a fake run for President to get NBC to pay up. However, as Trump makes some asinine statements, he is fired from NBC. But he has a "genius" idea: to continue on in his campaign. You all know what happened next: he denigrated his fellow Republican candidates, then the media, & finally his Democratic opponent Hillary Clinton. And not even Clinton could stop him as he won the 2016 presidential election (albeit losing the popular vote), where he only had a 15% chance of winning.

From here, Moore continues on going after Trump for his creepy demeanor towards his daughter Ivanka, & his commonalities with Matt Lauer, Bill O'Reilly, Charlie Rose, Mike Halperin, & Roger Ailes. But after that, Moore looks more at the system that got us here, starting with Rick Snyder, the Governor of Michigan. In 2014, he decided to build a pipeline from Lake Huron to Flint, & in the meantime, Flint would have to switch over to the water from the Flint River. And here started an event in the poorest city in America that also has a majority African-American population that can only be described as an ethnic cleansing. People died from Legionnaire's disease, & children were permanently maimed from lead consumption. And this still goes on today, as Snyder did nothing to stop it, & even Barack Obama did nothing to stop it, as they all said it was safe to drink, & as the state government falsified the data involving those sick in Flint.

Next, Moore goes on to talk about the egregious sabotage of the 2016 Democratic primaries, where the primaries were rigged in favor of Hillary Clinton & against Bernie Sanders, who was much more admired by the people. Even West Virignia, where Sanders won all 55 counties in the primary, went for Clinton at the Democratic National Convention. Afterwards, 100 million people did not vote in the election, many of them disillusioned by not only Trump, but Clinton as well.

From here, Moore looks at the hopeful future of America, where the young people are rising up to reform our system. Many younger people are running for Congress on a progressive agenda, namely Alexandria Ocasio-Cortez in New York. Also, Moore takes a look at the ultimately successful teacher strike in West Virginia, & at the students in Parkland, Florida, where after the mass shooting at Marjory Stoneman Douglas High School, have formed a major organization aimed at stronger gun control in America.

But ultimately, no one is spared in this film: not Trump, nor Snyder, nor Putin, nor Clinton, nor Obama, nor the Democrats, nor the Republicans, nor even Moore himself.

Michael Moore's direction is phenomenal. Moore is firing on all cylinders, both being bitingly funny at some parts, & heartbreakingly sincere at others. He gives us more of what we know he can give, & it's some of his best work.

This is the best documentary of the year. It is an impassioned call to arms, inspiring us all to rise up & do something to improve this country.