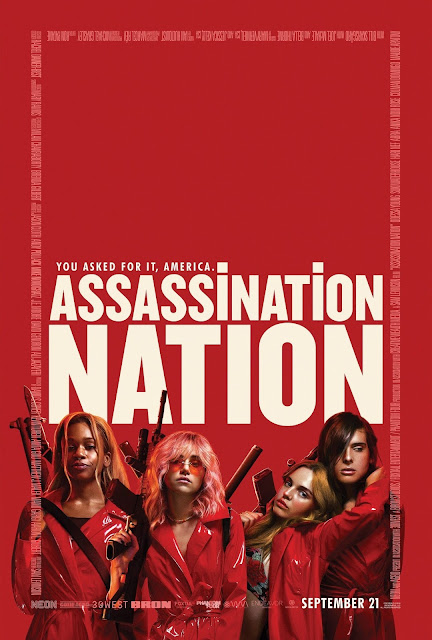 
We live in a society.

The world is nothing short of extremely screwed up these days. Our President is a despot, racists are coming back out of the woodwork, mass shootings plague our country, & many other forms of bigotry still exist.

Assassination Nation is a huge middle finger to all the things that plague modern society, & what a thrilling middle finger it is. The film follows Lily Colson (played by Odessa Young), a normal high school student in Salem, Massachusetts. Lily is usually with her 3 best friends: Sarah (played by Suki Waterhouse); Bex (played by Hari Nef), a trans woman; & Em (played by Abra), who lives with her single mother, Nance (played by Anika Noni Rose), who doesn't have the best reputation in town. Lily is also dating Mark (played by Bill Skarsgård). Besides babysitting the kids of her neighbor, Nick (played by Joel McHale), & secretly texting someone she refers to as "Daddy," Lily is just a regular teenage girl.

One day, things start to turn weird in Salem. Pictures involving Mayor Bartlett (played by Cullen Moss) are leaked to the town. Soon after, pictures involving Principal Turrell (played by Colman Domingo) are also leaked to the town. As the investigation into these major hackings occur, half of the people in Salem get hacked, including Lily, whose friend Grace (played by Maude Apatow) tells her that Reagan (played by Bella Thorne), the head cheerleader, sent some photos of Lily to someone & those photos were hacked.

Eventually, the whole town starts to descend into mass mayhem, including murder, assault, hanging, shooting, torture, & other nefarious acts. Now it is time for Lily, Sarah, Bex, & Em to rise up, defend themselves, & survive the night.

The cast is fantastic. Young, Waterhouse, Abra, Skarsgard & McHale all give great performances. But the standout performance comes from Hari Nef. Her performance is filled with tenacity, attitude & flashiness, & she completely sells it.

Sam Levinson's direction is excellent. Levinson shows all the craziness & carnage with a surfeit of style, & just enough substance to keep it from going off the rails.

Sam Levinson's screenplay is brilliant. The plot is intriguing, the characters are idiosyncratic & interesting, & the dialogue is terrifically biting.

And Marcell Rév's cinematography is spectacular. Rév captures all of the craziness with a keen eye, & there's also a 3-minute long take which is just phenomenal.

This is one of the best films of the year. It's a polarizing film, for sure, but it's one that is a conversation starter, & has some great acting, directing & writing to boot.

Assassination Nation was seen by me at the MJR Marketplace Digital Cinema 20 in Sterling Heights, MI on Friday, September 21, 2018. It is in theaters everywhere. Its runtime is 108 minutes, & it is rated R for disturbing bloody violence, strong sexual material including menace, pervasive language, & for drug & alcohol use - all involving teens.
at September 30, 2018