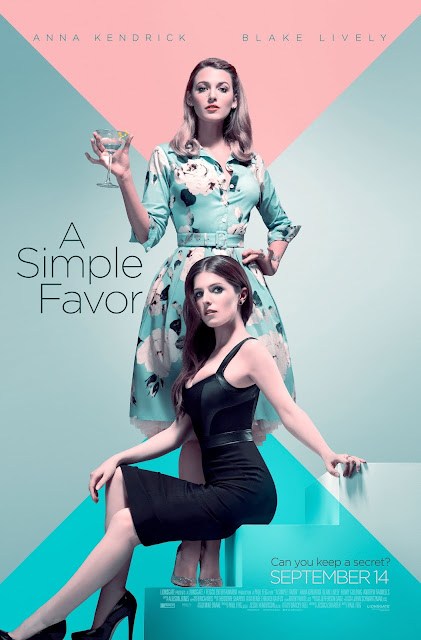 
Lately, many comedic actors & directors have gone more to the darker side of horrors & thrillers, namely Jordan Peele with Get Out & John Krasinski with A Quiet Place. Both of these instances have received critical & commercial success.

A Simple Favor is the newest of these crossovers, & is the most twisted & fun of them all. Based on the 2017 novel A Simple Favor by Darcey Bell, the film follows Stephanie Smothers (played by Anna Kendrick), a widowed mommy vlogger. She lives a very comfortable life with her son, Miles (played by Joshua Satine). She is an overachieving mother, always signing up to volunteer for PTA-led events at Miles' elementary school, much to the chagrin of the other parents, especially Darren (played by Andrew Rannells).

One day, Emily Nelson (played by Blake Lively), a PR director, is asked by her son, Nicky (played by Ian Ho), if he can have a playdate with Miles. After some begging, Emily finally relents, & also invites Stephanie over to have drinks with her. When Stephanie arrives, she is immediately stunned by Emily's very extravagant house. Over drinks, Stephanie & Emily begin to bond. Soon after, Stephanie meets Emily's husband, Sean Townsend (played by Henry Golding), a novelist & English professor.

A few days later, Emily calls Stephanie, asking her to do a simple favor: pick up Nicky from school for her, as she is doing something big at work. Stephanie obliges, expecting Emily to not be long. However, Emily doesn't arrive. Stephanie gets very worried, & after a while, calls the police & reports her disappearance. But as the days go by, Stephanie begins to wonder if she really knew Emily at all.

The cast is amazing. Anna Kendrick shows more of her perky self, & it's the best she's ever been at it. (The scene where she sings along to Ante Up by M.O.P. is awesome). Blake Lively is phenomenal, & this is easily her best performance. And their chemistry is powerful. They play off each other so well.

Paul Feig's direction is excellent. In his first non-full-fledged comedy in 15 years, Feig shows a lot of style here, & is able to handle the many tonal shifts that occur.

And Jessica Sharzer's screenplay is brilliant. The plot is so crazy, twisty, off-the-rails, but in such a good way. The characters are so well-written. And the dialogue is so perfect &, at many times, absolutely darkly hilarious.

This is one of the best dark comedies in recent memory. It has some great performances, stylish direction, & a truly amazing screenplay. It's a whole big bucket of fun.

A Simple Favor was seen by me at the MJR Marketplace Digital Cinema 20 in Sterling Heights, MI on Friday, September 14, 2018. It is in theaters everywhere. Its runtime is 117 minutes, & it is rated R for sexual content & language throughout, some graphic nude images, drug use & violence.
at September 22, 2018