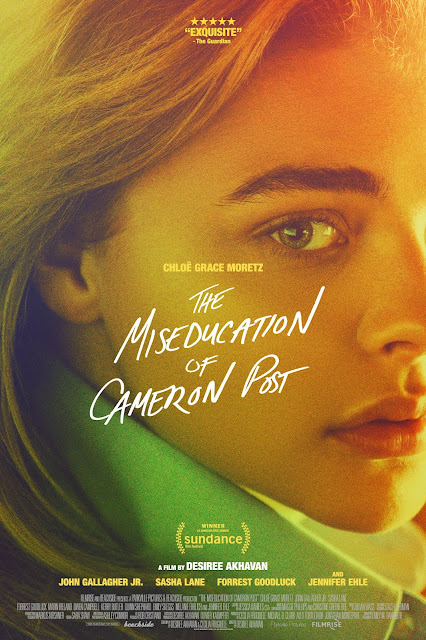 
The idea of gay conversion therapy, besides being barbaric, is an idea that many of us would consider to be outdated & behind us. However, in many conservative areas of the country, & even in areas some would consider to be moderately liberal, there are many people who still believe in the sickening ideology that you can "pray the gay away." Even our current Vice President (whom I hope never becomes President), Mike Pence, embraces the idea of it.

The Miseducation of Cameron Post centers on this & many other pressing topics involving LGBTQ+ youth, & it is a timely & groundbreaking piece of LGBTQ+ cinema. Based on the 2012 novel The Miseducation of Cameron Post by Emily M. Danforth, & set in 1993 Montana, the film follows Cameron Post (played by Chloë Grace Moretz), a junior in high school who lives with her aunt, Ruth (played by Kerry Barker), after the death of her parents when she was younger. While she is dating Jamie (played by Dalton Harrod), she is more in love with her friend, Coley Taylor (played by Quinn Shephard).

One night, during the homecoming dance, Jamie catches Cameron & Coley having sex in the backseat of a car. Soon after, Ruth finds out & sends Cameron to God's Promise, a gay conversion therapy center in the wilderness. The director of God's Promise is Dr. Lydia March (played by Jennifer Ehle), a psychiatrist who once "cured" her brother, Rev. Rick Marsh (played by John Gallagher Jr.). Cameron is assigned to a room with a roommate named Erin (played by Emily Skeggs), an avid Minnesota Vikings fan who deeply believes in the program's philosophy. However, Cameron doesn't find anything wrong with herself.

While out jogging, Cameron notices 2 people smoking weed in the basement. These 2 are Adam Red Eagle (played by Forrest Goodluck), a Native American whose father sent him to the program after he became an evangelical Christian with a passion for politics; & Jane Fonda (played by Sasha Lane), a rebellious teen. They mainly coast around what they are taught, giving the people at God's Promise what they want to hear & why they think they're LGBTQ+. Together, they try to navigate through the things that go on at God's Promise & find themselves along the way.

The cast is fantastic. Chloë Grace Moretz finally delivers on the promise she's been building her entire career. After a series of films that never really displayed her acting power, she finally gets to display it here. She gives one of the best performances of an LGBTQ+ youth I've ever seen. Jennifer Ehle is phenomenal. She makes our skin crawl with the words she says, saying them in such a nonchalant way that adds to the sickening ideology her character spouts. And the rest of the cast turns in some great supporting work, especially John Gallagher Jr., Forrest Goodluck & Sasha Lane.

Desiree Akhavan's direction is excellent. Akhavan directs with a steady, subdued hand, & gives the film a calm, yet quietly powerful feel throughout.

And the screenplay by Desiree Akhavan & Cecilia Frugiuele is amazing. The screenplay is very faithful to the novel, keeping what made the novel so great: the realism, the wit, & the amazing characters.

This is one of the best &, sadly, one of the more underseen films of the year. It has an amazing cast, a feeling of warmth, & a lot of wit to make it a uniquely affecting coming-of-age film.