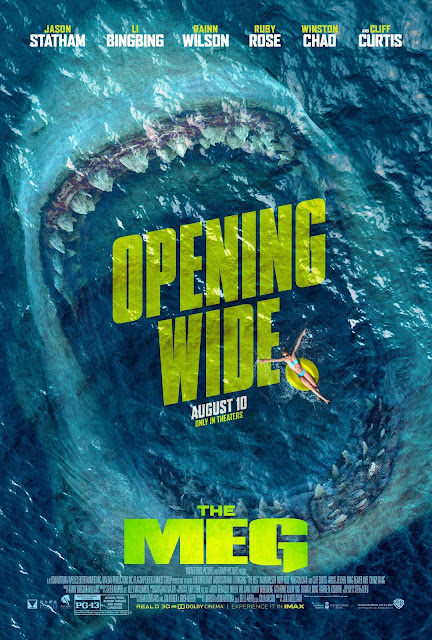 
Since Jaws came out back in 1975, shark films have been an integral piece of film history. Although a lot of them are bad, some are enjoyably bad, & others even good. But no matter their quality, you can't deny that they have made an impact on film as we know it today.

The Meg is definitely not perfect, but it's a good, cheesy throwback to the classic B-movies of the 20th century. Based on the 1997 book Meg: A Novel of Deep Terror by Steve Alten, the film follows Jonas Taylor (played by Jason Statham), a rescue diver haunted by the fact that he couldn't save the lives of 2 men trapped in a nuclear submarine, although he was able to rescue the several other people that were trapped. He says that he couldn't rescue them because he saw some creature attack the submarine; however, some colleagues dispute this, saying it's his excuse for pressure-induced psychosis.

5 years later, Dr. Minway Zhang (played by Winston Chao) & his daughter, Suyin (played by Li Bingbing), are embarking on an expedition to find a supposed deeper area of the Marianas Trench. The expedition is being funded by billionaire Dave Morris (played by Rainn Wilson) on the ship Mana One. Also joining in on the expedition are Jonas' former colleague, James "Mac" Mackreides (played by Cliff Curtis); Suyin's daughter, Meiying (played by Shuya Sophia Cai); tech specialists Jaxx Herd (played by Ruby Rose) & DJ (played by Page Kennedy); & the 3 explorers: The Wall (played by Ólafur Darri Ólafsson), Toshi (played by Masi Oka), & Lori (played by Jessica McNamee), who happens to be Jonas' ex-wife.

When the explorers go down & explore the new floor of the Marianas Trench, they are attacked by a large creature. Mac, believing this to be the same thing that attacked the submarine, tries to find Jonas to help rescue the explorers. Jonas is now a drunk living in Thailand, & although reluctant at first, decides to accept the mission.

After rescuing the explorers, they try & focus on killing the creature, which they have discovered is a megalodon shark, previously thought to have been extinct for millions of years. Now, they must kill it at all costs, before other civilians become in danger.

The cast is excellent. Jason Statham does what he always does: fight & kill, & look great doing it. Rainn Wilson is pure awesomeness. And the rest of the cast turns in some great supporting work as well.

Jon Turtletaub's direction is great. It's tonally inconsistent at times, but Turtletaub makes sure that there's always a schlocky undertone, & that, along with some thrilling moments, more than make up for the flaws.

The screenplay by Dean Georgaris, Jon Hoeber & Erich Hoeber is very good. Although the plot & the characters are formulaic, the dialogue is just cheesy enough to add on to the B-movie feel.

And the visual effects are amazing. The CGI is extremely well-done, especially the explosions, &, of course, the titular shark.

This is a very good B-movie. Although it is flawed, it's got enough good things going for it to make it worth the price of a ticket. And if you can, please see it in 3D. It's the most awesome way to see it.