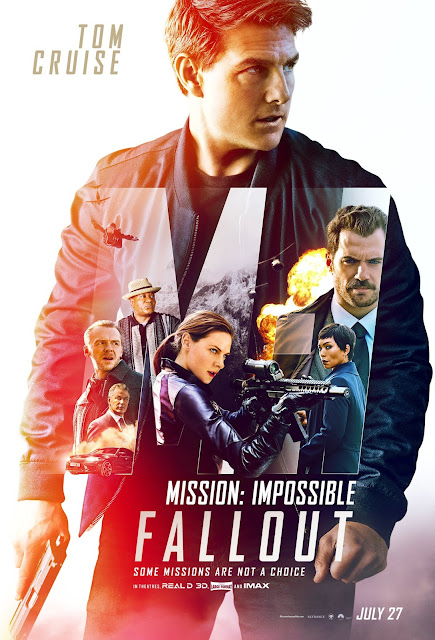 
The Mission: Impossible franchise has been churning on for 22 years now, & seems to age like fine wine. Almost every installment has been better than the last, & the franchise sets a new pinnacle whenever the newest installment releases in theaters.

But Mission: Impossible - Fallout isn't just the best film of the franchise. It's not just the best action film of the year. Mission: Impossible - Fallout is one of the best action films of all time. Set two years after the events of Mission: Impossible - Rogue Nation, the film follows IMF Agent Ethan Hunt (played by Tom Cruise), who after capturing Solomon Lane (played by Sean Curtis), & after becoming estranged from his wife, Julia (played by Michelle Monaghan), is now after a splinter sect of The Syndicate called The Apostles. Ethan tries to intercept the sale of 3 plutonium cores to The Apostles in Berlin, where he encounters colleagues Benji Dunn (played by Simon Pegg) & Luther Stickell (played by Ving Rhames). However, the planned interception of the sale eventually goes awry, & the plutonium is sold.

While in the midst of trying to recover the plutonium, Ethan runs into Ilsa Faust (played by Rebecca Ferguson), who will not disclose why she is in Paris. Although Ethan is concerned about why she is there, he is also concerned with Walker, as he does not seem to be as he appears.

The cast is excellent. Tom Cruise still has so much command & such a huge presence on the screen after all these years. And the absolute conviction he has to doing all those stunts is awe-inspiring. Henry Cavill shows not only that he can act, but that he can really act, with his subtle cunningness standing out at all times. And Simon Pegg is great as the comic relief.

Christopher McQuarrie's direction is phenomenal. He shows such intense command over the many action sequences, & keeps us at the edge of our seat at all times.

Christopher McQuarrie's screenplay is amazing. The plot feels more interesting than the other films in the franchise, as it's connected to the previous film. The characters are well-developed. And the dialogue is well-written, & very witty at times.

Rob Hardy's cinematography is fantastic. The color palette is gorgeous, & the wide shots are just so amazing to look at. And there's one sequence that is just perfectly shot.

Eddie Hamilton's editing is incredible. The film is extremely well-paced, & there isn't a single bad or jarring cut in the film.

The sound design is impeccable. Every noise is loud & in-your-face, yet it sounds so clear, crisp & not too overbearing.

The visual effects are terrific. Many of the effects are entirely realistic, a fresh change of pace from the CGI bonanzas that have become commonplace in blockbuster films these days.

And Lorne Balfe's score is astounding. Balfe's score is much like a Hans Zimmer score, with the uses of drums & punctuating staccatos, yet it doesn't feel like it's a ripoff. It feels fresh & in tune with the film.

This is one of the best films of the year. It's a bonafide action masterpiece, & certainly demands to be seen on the biggest screen possible.

Mission: Impossible - Fallout was seen by me at the MJR Troy Grand Digital Cinema 16 in Troy, MI on Thursday, July 26, 2018. It is in theaters everywhere. Its runtime is 147 minutes, & it is rated PG-13 for violence & intense sequences of action, & for brief strong language.
at August 08, 2018