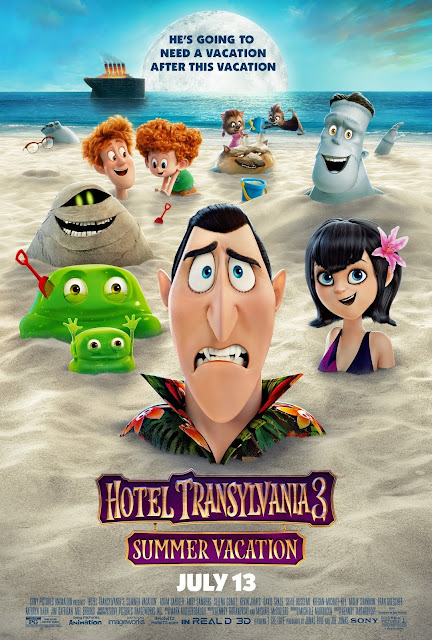 
Outside of his more dramatic performances, the Hotel Transylvania franchise is the only thing I can stand Adam Sandler in. If any film can do that nowadays, that's a huge feat in its own. But other than that, the franchise is a colorful, albeit slightly flawed, animation saga that does just enough to be considered good.

And Hotel Transylvania 3: Summer Vacation does just that. While it does have its fair share of flaws, it does exceed the expectations of a threequel, & becomes the best film in the franchise. The film follows Count Dracula (voiced by Adam Sandler), who is still feverishly running the Hotel Transylvania, with the help of his daughter, Mavis (voiced by Selena Gomez), & his son-in-law, Jonathan (voiced by Andy Samberg). However, Dracula's personal life is a mess, as he is forlorn over the fact that he is lonely since his wife died many years ago.

When they get on the cruise, Dracula is very upset about being surprised with the cruise. However, he is immediately lovestruck when he meets the captain of the cruise, Ericka (voiced by Kathryn Hahn). Dracula is surprised by this, as he didn't believe he could fall for someone again. Eventually, Ericka begins to reciprocate Dracula's affection. But there is something sinister with Ericka: her great-grandfather is the infamous monster hunter, Abraham Van Helsing (voiced by Jim Gaffigan). Now Ericka must decide to follow her heart or her mind, as Dracula must decide whether to stay in love a second time.

The voice cast is excellent. Adam Sandler gives a good voice performance, managing to not be irritable for the vast majority of the film. Andy Samberg is great, as always. And Steve Buscemi is perfect once again.

Genndy Tartakovsky's direction is great. Although it does falter a bit towards the end, he makes sure the film maintains its wonderfully zany tone throughout.

The screenplay by Genndy Tartakovsky & Michael McCullers is very good. Although the plot is a bit formulaic & some of the humor falls flat, most of the humor succeeds & the characters are wildly idiosyncratic.

And the animation is wondrous. It's very colorful & zany, & like many films from Sony Pictures Animation, is very attentive to detail.

This is a solid addition to the Hotel Transylvania franchise. Although it does have some flaws, it's a good crowdpleaser with some great voice performances & colorful animation.

Hotel Transylvania 3: Summer Vacation was seen by me at the MJR Partridge Creek Digital Cinema 14 in Clinton Township, MI on Friday, July 27, 2018. It is in theaters everywhere. Its runtime is 97 minutes, & it is rated PG for some action & rude humor.
at August 09, 2018