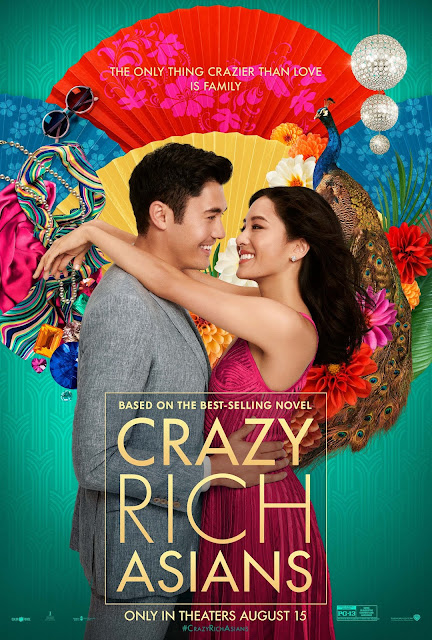 
I've said it before & I'll say it again: representation, in any form of media, for any marginalized community, matters so much. For these people to see themselves on the silver screen or on TV, it gives them the opportunity to see people like them doing regular things, instead of being cast as the sidekick or the villain. Lately, we've been getting more & more pieces of media featuring positive representations of these communities, &, hopefully, this is just the start.

Crazy Rich Asians, while having a couple minor flaws, is a landmark for Asian representation, as well as a great romantic comedy-drama. Based on the 2013 novel Crazy Rich Asians by Kevin Kwan, the film follows Rachel Chu (played by Constance Wu), a Chinese-American economics professor at New York University. She is currently in a relationship with Nick Young (played by Henry Golding), a Chinese-Singaporean history professor at New York University.

One night, Nick asks Rachel to come with him to Singapore for the wedding of his childhood friend, Colin Khoo (played by Chris Pang) & his fiancée, Araminta Lee (played by Sonoya Mizuno). This will also give Rachel the opportunity to meet Nick's family & reunite with her college friend, Peik Lin (played by Awkwafina), as well as an opportunity for Nick to tell his mother, Eleanor (played by Michelle Yeoh), of his relationship with Rachel. However, Eleanor finds out before they even leave New York due to being revealed through texts sent by friends, acquaintances, & even members of Nick's family.

When they get on the plane to Singapore, Rachel is shocked to discover that they are in a first-class suite. This is where Nick reveals to her that his family are very rich real estate developers. Once they arrive in Singapore, Rachel & Nick meet with Colin & Araminta at a street vendor marketplace. The next day, Rachel reunites with Peik Lin, & meets her father, Wye Yun (played by Ken Jeong), who once studied in the United States. There, when they realize that Rachel is dating Nick, Peik Lin & her family tell Rachel that Nick has vastly understated how rich his family is: Peik Lin's family is rich, but Nick's family is crazy rich.

The cast is spectacular. Constance Wu shows that she can do just as great of an acting job in film as she does on TV. Michelle Yeoh gives a great performance that should thrust her back into the forefront. Awkwafina is showing herself as one of the best up-&-coming comedic actresses in Hollywood. Ken Jeong, in his small screen time, does some of his funniest work in years. And Nico Santos is an absolute scene-stealer.

Jon M. Chu's direction is great. Although there are a couple issues as to tonal shifts, Chu makes up for that with a lot of style & a warm heart throughout.

And Nelson Coates' production design is fantastic. The sets are so immersive, & match the lifestyle of the characters, with their vibrant colors & expensive decorations.

This is one of the better romantic comedy-dramas in recent memory. Although it does have a couple small flaws, they're more than made up for by a charming cast, a great screenplay, & dazzling production design.

Crazy Rich Asians was seen by me at the MJR Marketplace Digital Cinema 20 in Sterling Heights, MI on Wednesday, August 15, 2018. It is in theaters everywhere. Its runtime is 120 minutes, & it is rated PG-13 for some suggestive content & language.
at August 22, 2018