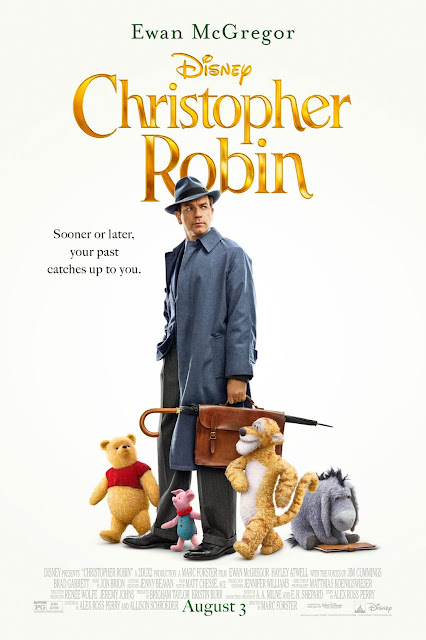 
When we get older, into our 20s & 30s, we start pushing away childish things in order to maintain an adult life, especially with work being overbearing. Eventually, we start becoming distant from our families as well. But the things from our childhoods start coming back into our lives, helping us focus more on family.

Christopher Robin may be marketed as a children's film, but it's not really that. It's a film for those people that I mentioned in the first paragraph. And it's one of the most endearing surprises of the year. Based on characters from the 1926 book Winnie-The-Pooh by A.A. Milne & E.H. Shepard, & set in 1950s London, the film follows Christopher Robin (played by Ewan McGregor), who is now settling into his work-heavy life as an efficiency expert at Winslow Luggages. As a result, he neglects his wife, Evelyn (played by Hayley Atwell), & his daughter, Madeline (played by Bronte Carmichael), whom Christopher is planning to send to boarding school to her dismay.

With the company not doing well, Christopher is asked to decrease expenditures by 20% & plan it out by Monday. However, he is supposed to go with Evelyn & Madeline to their cottage in Sussex for the weekend. Unfortunately, Christopher reluctantly decides to stay home & create the plan while Evelyn & Madeline go to Sussex.

Pooh awakes, unable to find his friends, & finds his way to Christopher's door. He ends up finding himself in London, & encounters Christopher, who is surprised to see him. Together, they set off on an adventure to find Pooh's friends, while trying to solve the work situation & helping Christopher become closer with his family along the way.

The cast is spectacular. Ewan McGregor further demonstrates his vastly underrated acting power, with a performance that is easily one of the best of his career. The voice cast also does an excellent job, especially Cummings & Garrett.

Marc Forster's direction is excellent. Forster keeps the film on a positive note the whole way through, never reaching any form of negativity or mean-spiritedness.

Matthias Koenigsweiser's cinematography is astounding. The camerawork is very reminiscent of the camerawork of the films of Terrence Malick: many shots of nature & hands grazing the tops of grass, & it doesn't feel derivative. It feels fresh & looks amazing.

And the visual effects are stunning. The effects make all of the animals from the Hundred Acre Wood look like realistic stuffed animals.

This is one of the best & most heartwarming films of the year. It's well-acted & well-made, & has some touching messages. We need more films like this in this era we're in.

Christopher Robin was seen by me at the MJR Marketplace Digital Cinema 20 in Sterling Heights, MI on Friday, August 3, 2018. It is in theaters everywhere. Its runtime is 104 minutes, & it is rated PG for some action.
at August 20, 2018