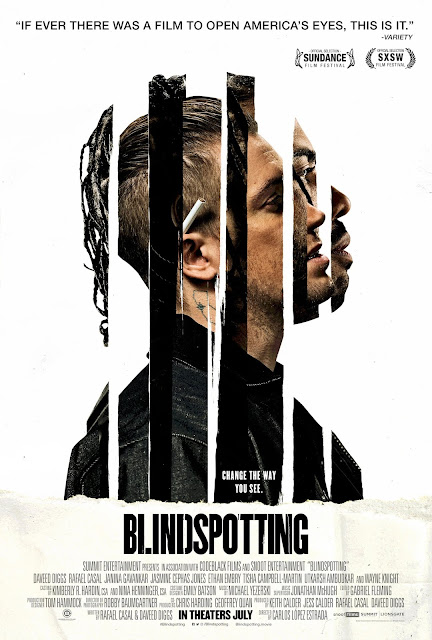 
Gentrification is becoming more & more of an issue in the world of today. Although it may look all nice & pleasant on the outside, & it does clean up some discarded areas, its effect is very negative on the people of those community, diluting & eventually destroying the culture that once made the community stand out.

Blindspotting deals with this theme, along with many other hot-button themes in today's society, in some very original ways, & is one of the best films of the year. The film follows Collin Hoskins (played by Daveed Diggs), a 20-something African-American convicted felon in Oakland. He is currently 3 days away from the end of his probation period. He works at a moving company with his white-but-acting-black best friend, Miles (played by Rafael Casal). Miles lives with his wife, Ashley (played by Jasmine Cephas Jones), & their son, Sean (played by Ziggy Baitinger). Although Collin & Miles have been best friends since childhood, Miles has always had a penchant for getting into trouble, with Collin facing the consequences of it. However, they always stick with each other through thick & thin, as they encounter various people in their day-to-day life, including Mama Liz (played by Tisha Campbell-Martin), a local hairdresser; Rin (played by Utkarsh Ambudkar), a friend of a friend; & Patrick (played by Wayne Knight), a local artist & photographer who wants to remind people of the old, ungentrified Oakland. Also circling around their day-to-day life is Val (played by Javina Gavankar), Collin's ex-girlfriend & the desk worker at the moving company.

On his third-to-last night of probation, while trying to get back to the halfway house before his 11pm curfew, Collin is stopped at a red light. When the light turns green, he starts driving, but a young African-American man stops in front of him. Collin is upset about it, as the man starts running along the left side of the moving truck. He then notices a white police officer chase after the man, & as the man yells "Don't shoot! Don't shoot!", with his hands in the air, the officer shoots him multiple times, killing him. Collin & the officer, Sgt. Molina (played by Ethan Embry), briefly look at each other, both with horrified expressions on their faces, as Collin is then told to drive away by other officers.

The cast is fantastic. Daveed Diggs is an absolute revelation. Fresh off his role on Broadway as Thomas Jefferson & Marquis de Lafayette in Hamilton, Diggs shows that he can be just as good on the screen as he is on the stage. Rafael Casal is also spectacular. He's volatile, vulnerable, & can make us feel sympathetic one second & make our skin crawl the next.

Carlos López Estrada's direction is excellent. In his directorial debut, López Estrada shows so much promise. He showcases some style, but always backs it up with substance. I have a feeling he's going to be someone to watch in independent cinema over the next few years.

The screenplay by Rafael Casal & Daveed Diggs is brilliant. Casal & Diggs, real-life friends since childhood, really put a lot of heart & love for their hometown into the script, & it really shows. The narrative feels so original & so timely. The characters feel realistic & 3-dimensional. The themes are well-touched upon, including gentrification, police brutality, racism, & mass incarceration in the African-American community. And the dialogue is perfect, led by multiple freestyle raps, & is also, at many times, downright hilarious.

Robby Baumgartner's cinematography is amazing. The color palette & look of the film are so astounding, & there's one shot in the film that not only looks breathtaking, but packs a huge emotional punch.

And Gabriel Fleming's editing is superb. The film is perfectly paced & assembled, as it is able to fit so much into its short runtime & give all its moving parts ample time to display themselves.

This is definitely a once-in-a-blue-moon film, & one that will open the eyes of those who see it. It's a hard watch, but it's one that should be seen by many.

Blindspotting was seen by me at the MJR Marketplace Digital Cinema 20 in Sterling Heights, MI on Sunday, July 29, 2018. It is currently in 2 theaters in the Detroit area: the Landmark Main Art Theatre in Royal Oak, MI; & the State Theatre in Ann Arbor, MI. Its runtime is 95 minutes, & it is rated R for language throughout, some brutal violence, sexual references & drug use.
at August 12, 2018