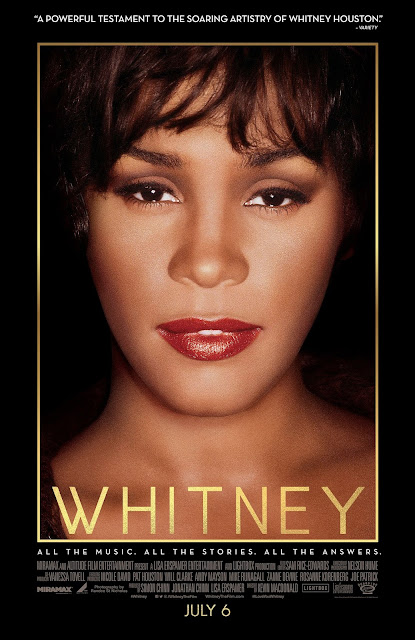 
No words, phrases, sentences, or poems can accurately describe the sheer power of Whitney Houston. Her presence, her voice, her personality, her beauty; nothing can describe it. Although she passed on well too soon, Whitney left us with a vast library of amazing songs with pulsating vocals, & a status as one of the greatest artists of all time.

Whitney takes an in-depth look at her life from birth to death through interviews with friends & family, & it's a shocking documentary that is one of the best in years. The film follows Whitney Houston, born in 1963 in Newark to gospel icon Cissy Houston & former Army serviceman John Houston. She had one brother, Michael, & one half-brother, Gary Garland. Her first cousins were singers Dionne Warwick & Dee Dee Warwick. After the 1967 Newark riots (one of the two most notorious riots from that summer), the Houstons moved to the higher-class city of East Orange, New Jersey.

At the age of 11, she started singing in her local gospel choir, & eventually became a model with aspirations of becoming a full-time singer by 1980. In 1983, Clive Davis of Arista Records signed her to a record contract, & eventually released her self-titled debut album in 1985.

From that moment on, she cemented herself as an icon in the music industry, with 7 straight #1 singles on the Billboard Hot 100: Saving All My Love for You; How Will I Know, Greatest Love of All (from 1985's Whitney Houston); I Wanna Dance with Somebody (Who Loves Me); Didn't We Almost Have It All; So Emotional; & Where Do Broken Hearts Go (from 1987's Whitney), a record that is still unbroken to this day.

She would only become more successful from there. In 1991, she sang The Star-Spangled Banner at Super Bowl XXV, which is considered to be the greatest rendition of the national anthem of all time. Also in 1991, she released her third album, I'm Your Baby Tonight, with 2 #1 singles, 2 others in the top 20, & 2 more on the R&B top 20. But she reached her peak in 1992 with the release of the romantic thriller The Bodyguard. The film was her first film appearance, & co-starred Kevin Costner. Although it received mixed reviews, it was a vast commercial success, & the soundtrack became the highest-selling film soundtrack of all time, with 2 songs (I Have Nothing & Run to You) being nominated for the Oscar for Best Original Song. But the most notable song from that album was her cover of Dolly Parton's I Will Always Love You, which became her signature song & the 5th best-selling single of all time.

At this point, she was at the top. She couldn't go anywhere but down. But it wasn't expected that she would fall hard, with her marriage to Bobby Brown being very abusive & her drug addiction enveloping her for the rest of her life.

Kevin Macdonald's direction is superb. He shows Whitney for who she was, but never depicts her as despicable or deplorable as a result of her actions. He lets us know she was a good person with a torued soul. Also, through the very personal interviews, he uncovers some truly shocking events about her life.

This is the best documentary of the year so far. It's a beautiful testament to the life of one of the greatest artists of all time, who will be sorely missed for generations to come.

Whitney was seen by me at the MJR Marketplace Digital Cinema 20 in Sterling Heights, MI on Sunday, July 8, 2018. It is currently playing in 1 theater in the Detroit area: the AMC Star Fairlane 21 in Dearborn, MI. Its runtime is 120 minutes, & it is rated R for language & drug content.
at July 23, 2018