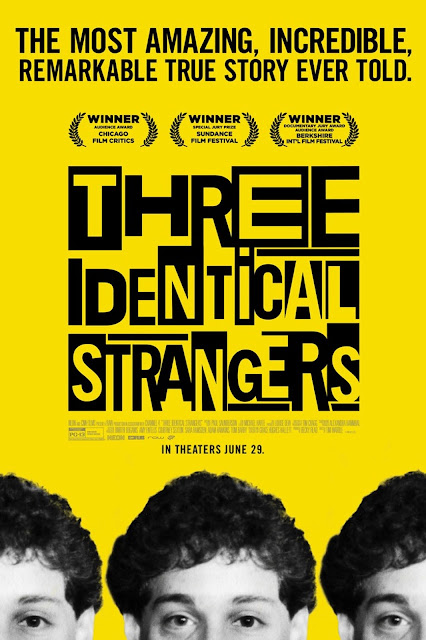 
There's an old adage that goes "truth is stranger than fiction."

And that adage has never been more true than it is in Three Identical Strangers, the best documentary of the year so far. The film follows Bobby Shafran, who is about to go to a community college in the fall of 1980. But something interesting occurs when he arrives on campus. People start asking him how his summer was, what's going on, & some girls even kiss him. But the weirdest thing is that people are calling him "Eddy."

Michael Domnitz, who was there the previous year & knew Eddy Galland, saw Bobby, & knowing that Eddy wasn't returning to the community college that year, stops Bobby, asks him some questions, & tells him that he may have a twin brother. Michael calls Eddy, & has Bobby talk to him. Bobby asks him when he was born. July 12, 1961. He asks him if he was adopted. Yes. He asks him what adoption agency he was adopted from. Louise Wise Services. It's official: they're twin brothers that were separated after 6 months.

Bobby & Michael drive as fast as possible down from the community college to Eddy's house in Long Island, & when they meet, it is right out of the movies: they moved the same way, they looked the same, & they were, both biologically & personality-wise, the same. The news makes it to all the newspapers & TV stations, & everyone is elated.

But this is when the story goes from amazing to out-of-this-world. David Kellman, who was also adopted, reads about the story in the New York Post. He notices that Bobby & Eddy look exactly like him. He then calls about the story & then says that he's the third brother. The twins have just become triplets.

But during their time on cloud nine, their adoptive parents had questions. Why were they separated? Eventually, the triplets began to ask this question. But the truth they find is dark, despicable, & is something that screws up their lives for a long time.

Tim Wardle's direction is phenomenal. Wardle plays the film as an inspiring, charming & heartwarming true story for the first half, but in the second half, completely turns the film on its head, making it into a dark, shocking tale of nature vs. nurture.

This is the best documentary of the year so far, & certainly one of the most jaw-dropping documentaries in a long time. It's a shocking tale of three triplets being reunited & the reason why they were separated in the first place.

Three Identical Strangers was seen by me at The Maple Theater in Bloomfield Township, MI on Monday, July 16, 2018. It is currently in 4 theaters in the Detroit area: the AMC Forum 30 in Sterling Heights, MI; The Maple Theater in Bloomfield Township, MI; the Phoenix Theatres - Laurel Park Place in Livonia, MI; & the State Theatre in Ann Arbor, MI. Its runtime is 96 minutes, & it is rated PG-13 for some mature thematic material.
at July 25, 2018