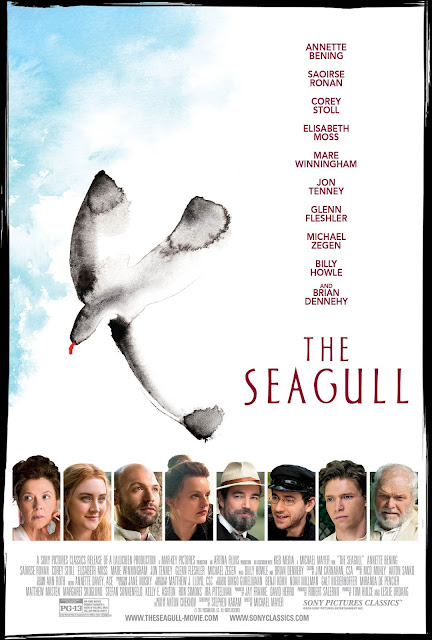 
Anton Chekhov's 1895 play The Seagull has long been considered to be one of the greatest achievements in modern theater.

The Seagull, the most recent film adaptation of the play, isn't one of the greatest achievements in modern cinema, but it's a solid adaptation. Based on the 1895 play The Seagull by Anton Chekhov, & set in early 20th-century Russia, the film follows Irina Arkadina (played by Annette Bening), a well-renowned theater actress. For the summers, she travels to the estate of her brother, Pjotr Sorin (played by Brian Dennehy), also bringing along her son, Konstantin (played by Billy Howle). This time, she also brings her lover, novelist Boris Tregorin (played by Corey Stoll). Also at the estate are Dr. Dorn (played by Jon Tenney); schoolteacher Mikhail (played by Michael Zegen); property manager Shamrayev (played by Glenn Fleshler); his wife, Polina (played by Mare Winningham); & their daughter, Masha (played by Elisabeth Moss).

Nina Zarechnaya (played by Saoirse Ronan), a young actress from a nearby estate, is in a relationship with Konstantin, but turns her attention to Boris, who is with Irina, who once dated Dr. Dorn, who receives attraction from Polina, who is married to Shamrayev, who is the father of Masha, who receives attraction from Mikhail, but is attracted to Konstantin. Eventually, this web of attraction will be sorted out, but not without much consternation.

The cast is fantastic. Every performance is great, but the standouts are Bening, Ronan & Moss. Bening gives one of her best performances, as she ages like fine wine in both life & in her work. She continues to get better & better as she gets older, & her sheer tenacity is on full display here. Ronan is the best actress of her generation, & she further cements that status here. And Moss, even with not as much screen time as the aforementioned actresses, manages to cast an indelible mark with her performance.

Michael Mayer's direction is great. Although there are a few rough tonal shifts, Mayer overcomes these flaws with a steady hand, always sure to have the film be compelling.

Stephen Karam's screenplay is very good. Although a few parts feel a bit rushed together due to the removal of some aspects from the play due to the runtime, the characters & dialogue are always very intriguing.

Matthew J. Lloyd's cinematography is amazing. With a mix of wide shots & intimate close-ups, Lloyd manages to fully capture the emotions of the characters through the visuals.

Ann Roth's costume design is phenomenal. The costumes are very period-accurate, elegant, & perfectly reflect the social standing of the characters.

And Jane Musky's production design is excellent. The sets are so visually stimulating, elegant, & period-accurate.

This is a solid adaptation of Chekhov's play. Although there are a few moderate flaws, the performances & period elements are enough to back the film up & keep it going strong.

The Seagull was seen by me at The Maple Theater in Bloomfield Township, MI on Wednesday, June 20, 2018. It is currently in 1 theater in the Detroit area: the State Theatre in Ann Arbor, MI. Its runtime is 98 minutes, & it is rated PG-13 for some mature thematic elements, a scene of violence, drug use, & partial nudity.
at July 02, 2018