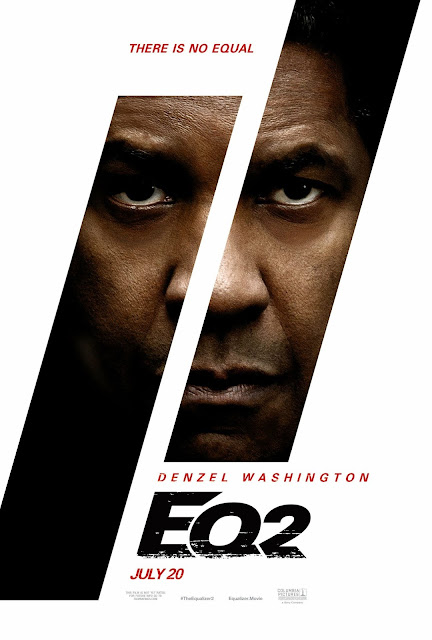 The majority of R-rated action films with notable leads have lately been great successes. John Wick with Keanu Reeves, Ryan Gosling with Drive, & Denzel Washington with The Equalizer are all perfect examples of that statement.

I loved The Equalizer, so I was a bit skittish about The Equalizer 2, since most sequels aren't as great as the first. And although it was a bit flawed, it was still a very good sequel. The film follows Robert McCall (played by Denzel Washington), who now works as a Lyft driver while still doing his vigilante work. Also, with help from his former FBI colleagues, Susan (played by Melissa Leo) & Brian (played by Bill Pullman) Plummer, he helps the less fortunate out. Also, McCall has taken somewhat of a mentorship to Miles Whittaker (played by Ashton Sanders), a young man with a passion for art but has a troubled life.

One day, Susan & McCall's former colleague, DIA operative Dave York (played by Pedro Pascal), go to Brussels to investigate a supposed murder suicide. After completing the investigation, Susan goes to her hotel room. She is followed in by two assailants who attack her. Although she fights back, she is killed by them.

The cast is excellent. Denzel Washington shows again that he is a force to be reckoned with, & shows his commanding presence once again. Ashton Sanders also does a great job, showing more of the promise he showed in Moonlight.

Antoine Fuqua's direction is amazing. Fuqua shows a lot of great command over the spectacular action sequences, & is able to keep a strong hold on the tone of the film.

Richard Wenk's screenplay is good. Although the plot is formulaic, the strong characters & sharp dialogue help build up the screenplay.

And Oliver Wood's cinematography is superb. Wood perfectly captures the hectic atmosphere of the film with strong camerawork, including some great wide-angle shots.

This is a very good action sequel. Although it doesn't match the first, it still has enough to make it better than most action sequels in recent memory.