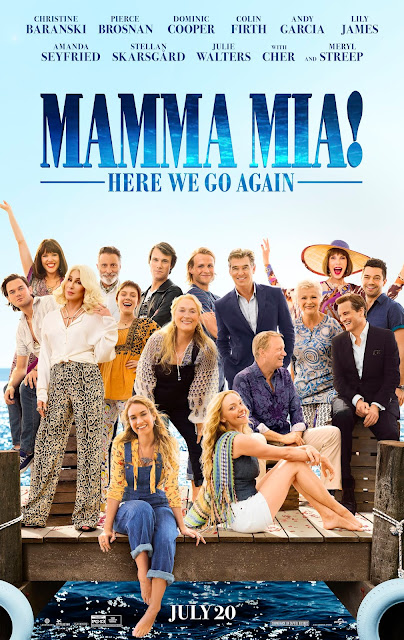 
Let's just get this out of the way: I love ABBA & I loved Mamma Mia!

So it's fair to say that I was pretty excited for Mamma Mia! Here We Go Again. And it did not disappoint. It's one of the few sequels that improves on the original. Set in both 1979 & in the present, the film follows Sophie Sheridan (played by Amanda Seyfried), who is preparing for the grand reopening of her mother Donna's (played by Meryl Streep) hotel on the fictional Greek island of Kalokairi. However, Donna passed away a year earlier. Also, two of her three surrogate fathers, Harry Bright (played by Colin Firth) & Bill Anderson (played by Stellan Skarsgård), are unable to make the reopening ceremony. And to add further insult to injury, her husband, Sky (played by Dominic Cooper), is stuck in New York, & they are growing further apart. However, one of her surrogate fathers (& stepfather), Sam Carmichael (played by Pierce Brosnan), who is still grief-stricken over Donna's death, is able to make it.

Donna's old friends, Rosie Mulligan (played by Julie Walters), who has split up with Bill & cries even at the mention of Donna, & Tanya Chesham-Leigh (played by Christine Baranski), who is still her usual man-hungry cougar self, arrive on Kalokairi for the grand reopening. When they arrive, they regale with her about how Donna had Sophie all on her own.

Back in 1979, a young Donna Sheridan (played by Lily James) has just graduated from Oxford along with young Rosie Mulligan (played by Alexa Davies) & young Tanya Chesham-Leigh (played by Jessica Keenan Wynn). Donna is eager to travel the world. She first stops off in Paris, where she meets young Harry Bright (played by Hugh Skinner). After that, she then travels to Kalokairi on the boat of young Bill Anderson (played by Josh Dylan). However, Harry has followed her to Kalokairi, but he arrives too late. On Kalokairi, after a rainstorm, she meets young Sam Carmichael (played by Jeremy Irvine), who helps Donna after a horse was spooked in the basement of a farmhouse.

Back in the present, a storm hits, causing all of Sophie's plans for the ceremony to go awry. But eventually, things are made right. But things get a little complicated when Sophie's estranged grandmother, Ruby (played by Cher), flies in on a helicopter for the ceremony & focuses her eye on the hotel manager, Fernando Cienfuegos (played by Andy Garcia).

The cast is fantastic. Amanda Seyfried & Lily James show that they can be great leads when given the opportunity. Christine Baranski, Julie Walters, Colin Firth & Stellan Skarsgård give great supporting performances. Cher is iconic. And everyone (yes, including Pierce Brosnan, although he doesn't do it a lot) does at least a good job at singing.

The screenplay by Ol Parker, Richard Curtis & Catherine Johnson is amazing. The plot is intriguing, the characters are well-conceived, & the dialogue is humorous & heart-warming.

And the soundtrack is spectacular. Filled with so many great songs from ABBA, the soundtrack helps build the story & adds to the light tone of the film.

This is one of the best films of the year so far. It's light-hearted, humorous, & one of the rare sequels that improves on the original.

Mamma Mia! Here We Go Again was seen by me at the MJR Chesterfield Crossing Digital Cinema 16 in Chesterfield Township, MI on Friday, July 20, 2018. It is in theaters everywhere. Its runtime is 114 minutes, & it is rated PG-13 for some suggestive material.
at July 26, 2018