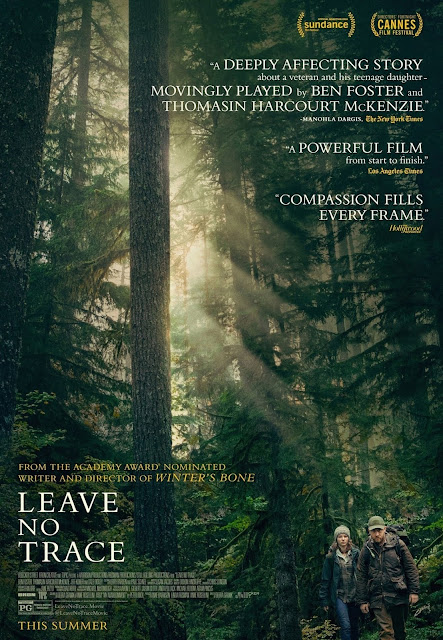 
Our past is what drives us. It drives us to be better, to do what needs to be done, to keep moving forward. But it may end up being what holds us back. And if so, what does that mean for the people around us?

Leave No Trace explores that idea in the most intimate way I've ever seen, & is one of the most beautiful & touching films of the year. Based on the 2009 book My Abandonment by Peter Rock, the film follows Will (played by Ben Foster), a former veteran of an unknown war (presumably Iraq or Afghanistan) living in a park in Portland with his 13-year-old daughter, Tom (played by Thomasin McKenzie). Their existence is very isolated, & Will has taught Tom more advanced stuff when it comes to academics, along with many survival skills. Most nights, Will suffers from nightmares as a result of his PTSD from the war.

One day, Tom accidentally draws attention to a jogger, who alerts the authorities. They arrive soon after, placing Will & Tom into social services. After some tests are done, they are placed into a home in rural Oregon, & Will gets a job cutting Christmas trees. They attempt to adapt to this lifestyle, as Tom begins to start school & learn social skills. But the process of adapting to their new environment proves to be much harder than they imagined.

The cast is amazing. Ben Foster shows once again that he is a force to be reckoned with & has been for a long time. His performance is very nuanced & compassionate, & is easily his best performance. And Thomasin McKenzie gives the best breakout performance of the year so far. At 17, she is wise beyond her years, & has the talents of an actress with much more experience than her. Her performance is one of a more adult power, as her character had to grow up very fast, & had to take on more of an adult role in the family. I have no doubt that she will go very far in the years to come.

Debra Granik's direction is excellent. Granik, notable for her 2010 film Winter's Bone, takes a very low-key & nuanced approach here. She handles the film with such gentle care & affection, making the film into a quiet, immersive experience.

Michael McDonough's cinematography is astonishing. The color palette is gorgeous, & the camerawork is very intimate.

Jane Rizzo's editing is terrific. It's very seamless in its style, as the film is very well-assembled, & the pacing is very well-done.

This is one of the best films of the year. It's a quiet, touching & altogether masterful film powered by its two lead performances.