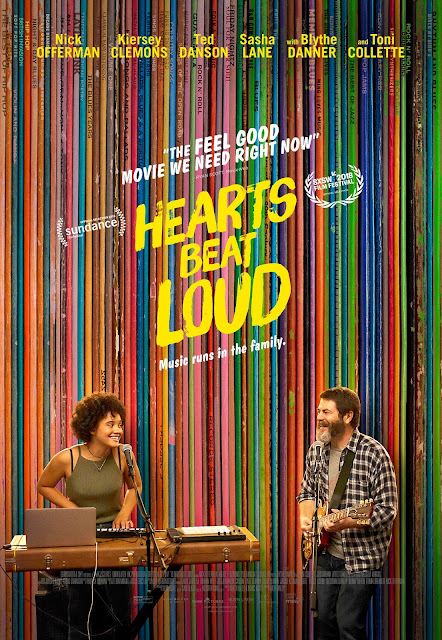 
In these dark times that we suffer through today, we really need some feel-good, light-hearted films to pick us up.

Hearts Beat Loud is just that. It's a lovely, endearing & amazing dramedy. The film follows Frank Fisher (played by Nick Offerman), a middle-aged record store owner & former singer in the Brooklyn neighborhood of Red Hook. His wife, who also sang with him, died in 2006 from being hit by a car while on her bike. His daughter, Sam (played by Kiersey Clemons), is on her way to UCLA to study medicine, & is in love with Rose (played by Sasha Lane). His mother, Marianne (played by Blythe Danner), is becoming more senile. And even though his landlord & friend, Leslie (played by Toni Collette), tries to keep the rent low, Frank finds it harder to keep the record shop going in its current shape in an era where people would rather be lazy & buy their songs digitally than buy them on vinyl & listen to music in the best quality. He gets by with frequent visits to the bar owned by his friend, Dave (played by Ted Danson), & the occasional jam session with Sam.

And the jam session is what annoys Sam one night when Frank suggests it. Reluctant at first because of her schoolwork, Sam agrees to take part in it. Sam does the vocals & keyboards, while Frank takes hold of the guitar. They play a song entitled Hearts Beat Loud & Frank records it, eventually putting it on Spotify under the artist name We're Not a Band.

The next morning, in line for coffee, Frank hears the song being played in the coffee shop through Spotify. Needless to say, he is overjoyed. Eventually, after he tells Sam, they start jamming more often. But Sam is about to go to UCLA, & Frank doesn't want to let go of her yet.

The cast is superb. Nick Offerman shows that he does have some dramatic acting power in him, & his performance here is as great as his performance as the handsome & patriotic man with the most gorgeous mustache ever, Ron Swanson on the sitcom Parks & Recreation. Kiersey Clemons shows such immense promise & delivers on it, proving that she will go far. And it's always great to see Ted Danson in anything these days.

Brett Haley's direction is excellent. Haley has a very steady hand on the material, & makes sure the film doesn't deviate from a very endearing & heartwarming tone.

The screenplay by Brett Haley & Marc Basch is amazing. The characters feel real & you actually care about them. And the dialogue feels incredibly human.

And the music is wonderful. Keegan DeWitt's ambient & synth-driven score gives a quirky & relaxed feeling to the film. And the songs sung by Kiersey Clemons & Nick Offerman are just so incredibly joyful to listen to.

This is one of the best films of the year. It's an incredibly sweet & heartwarming film, which is definitely what we need right now.

Hearts Beat Loud was seen by me at the Landmark Main Art Theatre in Royal Oak, MI on Friday, June 29, 2018. It is currently in 2 theaters in the Detroit area: The Patriot Theater in Grosse Pointe Farms, MI; & the State Theatre in Ann Arbor, MI. Its runtime is 97 minutes, & it is rated PG-13 for some drug references & brief language.
at July 20, 2018