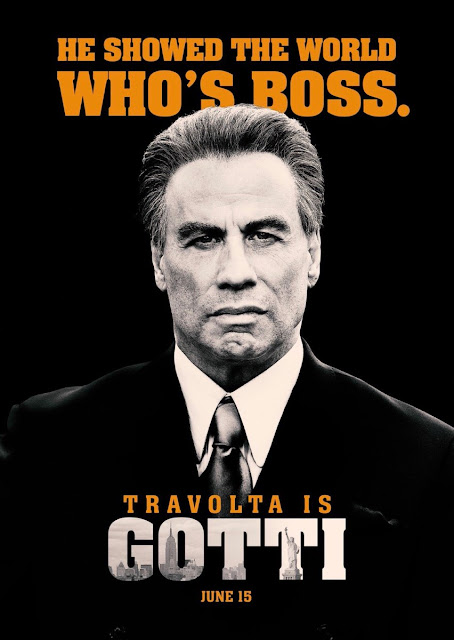 
Some films have nothing of value to them. These films may have bad performances, bland or uncontrolled direction, a cliched or overwritten screenplay, & no visual style whatsoever.

Gotti fits all of those qualities to a T, & is certainly the worst film of the year so far. The film follows John Gotti (played by John Travolta), the infamous boss of the Gambino crime family in New York from 1986-2002. Gotti quickly became a rising star in the family, & was taken under the wing of Neil Dellacroce (played by Stacy Keach). After his hit on boss Paul Castellano (played by Donald John Volpenhein) in 1986, Gotti became the new boss.

On the personal side of things, Gotti was married to Victoria (played by Kelly Preston), & had 5 kids: Victoria (played by Ashley Drew Fisher); John Jr. (played by Spencer Rocco Lofranco); Frank (played by Nico Bustamante); Peter (played by Carter Anderson); & Angel (played by Jordan Trovillion). John Jr. eventually became a member of the Gambino crime family, even though Victoria wanted him to not be part of that life.

The cast is horrific. John Travolta gives no other expression during the movie except the expression one makes while on the toilet, & he upstages the other actors way too much. Spencer Rocco Lofranco can't act even to save his own life, as evidenced by his whiny presence. And Kelly Preston, John Travolta's real-life wife, has no chemistry with Travolta in the film, & comes off as a stereotypical mob wife that you'd see on VH1. She should not be allowed to act ever again because of this terrible performance in a career full of terrible performances.

Kevin Connolly's direction is terrible. Yes, E from Entourage directed this movie. And if that doesn't give you multiple red flags, then I don't know what will. He has no control of the film whatsoever, as his direction feels incredibly bland & plays off of too many mob film tropes.

The screenplay by Lem Dobbs & Leo Rossi is awful. The plot is way too cliched, the characters are thinly written, & the dialogue is just horrendous.

Michael Barrett's cinematography is mediocre. The color palette is way too gray & ugly, & the camerawork feels like it belongs in a Lifetime movie.

Jim Flynn's editing is very uneven. The pacing is unbearably slow, & at many times during the film, it feels like entire scenes that are very important to the plot have been taken out, leaving several plotholes.

And the soundtrack is garbage. Pitbull (yes, PITBULL) & Jorge Gómez did the score for the film, & it's way too overdramatic. Pitbull also wrote some songs for the film that are not good at all. And the rest of the soundtrack suffers from what I call "The Suicide Squad Problem": the songs may be good or better by themselves, but in the context of the film, they don't fit.

There has been a lot of controversy surrounding the film since its release. For a while after the film came out, there was a large discrepancy between the critics score (0%) & the audience score (at one time, 80%) on Rotten Tomatoes. The Gotti marketing team attacked the critics, calling them "trolls behind keyboards." Further controversy followed when the high audience score on Rotten Tomatoes was calculated from over 7,000 audience ratings, which is very fishy when you consider that Incredibles 2 (which came out the same weekend) had made 150 times as much money as Gotti did in the same weekend, but had almost the same number of audience ratings. It was even more fishy when it was discovered that many of the accounts that highly rated the film were created on or just before the weekend of Gotti's release, & the majority of those have only given a rating to Gotti (the majority of accounts that gave more than one review gave only two reviews, the other film being American Animals, which was co-distributed by MoviePass Ventures, who also co-distributed Gotti). The marketing team still vehemently denies the allegations.

This is not just the worst film of the year, but one of the worst films ever made. Nothing about this film is redeeming or well-done. Just stick to watching either The Godfather, The Godfather Part II, Goodfellas, Casino, or The Departed for the 50th time, or rewatching all episodes of The Sopranos again. Those options are much better than watching this. As Johnny Depp said in Donnie Brasco, you can fuhgeddaboutit.