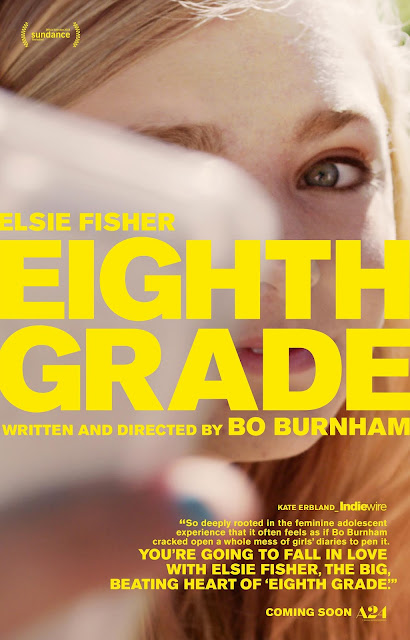 8th grade is hard for everyone. It's one of the worst years of your life. If you say that it wasn't at least somewhat bad, you're either lying or you peaked really, really early.

Eighth Grade, on the other hand, is not bad. It's fantastic. It's one of the best coming-of-age films of all time. The film follows Kayla Day (played by Elsie Fisher), a 13-year-old girl entering the last week of her 8th grade year. She posts vlogs on YouTube about how to make it through middle school & other related advice. However, the videos are barely viewed, if at all. Also, she is very shy, as she was voted "Most Quiet" by her classmates. Mark (played by Josh Hamilton), her single father, tries to connect with her as best & as much as he can, but he can't seem to fully succeed in his efforts.

Kennedy (played by Catherine Oliviere), a popular classmate of Kayla's, invites her to her pool party, or to be more correct, is forced to invite her by her mother. While there, Kayla has an anxiety attack, but eventually overcomes it, & meets Kennedy's very unpopular cousin, Gabe (played by Jake Ryan).

Kayla doesn't really have friends at school. But when she goes to the high school for a shadowing event & meets Olivia (played by Emily Robinson), Kayla finally finds someone who understands what she's going through & understands her.

The cast is fantastic. Elsie Fisher gives the best & most relatable performance of the year. She embodies every single 8th grader I knew in 8th grade, & she embodies how I was in 8th grade. The anxiety, the fear, the loneliness, everything about it, she just completely embodies those feelings. It is a tender & compassionate performance of the highest caliber. Josh Hamilton also gives an amazing performance. He is the dad we all know. He is the dad who tries to connect to his child but can't completely do it, although he tries his hardest out of love.

Bo Burnham's screenplay is brilliant. The plot feels so fresh & lively. The characters feel so real. And the dialogue is very human, &, in Burnham's trademark style, hilarious & cringey in a great way.

Andrew Wehde's cinematography is amazing. The camerawork & color palette are both luminous, & there's a one-take sequence that is the best one-take pool sequence since Boogie Nights.

Jennifer Lilly's editing is excellent. It's very well-paced, & very well-cut. It's cut in a dream-like way, like reminiscing on your 8th grade memories.

And Anna Meredith's score is superb. The score has a very electronic & synth feel to it, & it perfectly compliments the style of the film.

This is the best film of the year so far, & one of my 10 favorite films of all time. I don't think anything can top this for the rest of the year. It's a truly perfect coming-of-age film.

Eighth Grade was seen by me in an advance screening at the MJR Troy Grand Digital Cinema 16 in Troy, MI on Thursday, July 19, 2018. It will start showing at the Landmark Main Art Theatre in Royal Oak, MI & the State Theatre in Ann Arbor, MI on the night of Thursday, July 26, 2018 & start showing fully on Friday, July 27, 2018; it will expand further on Friday, August 3, 2018. Its runtime is 93 minutes, & it is rated R for language & some sexual material (but should've been rated PG-13 for thematic elements including brief strong language & some sexual content).
at July 25, 2018