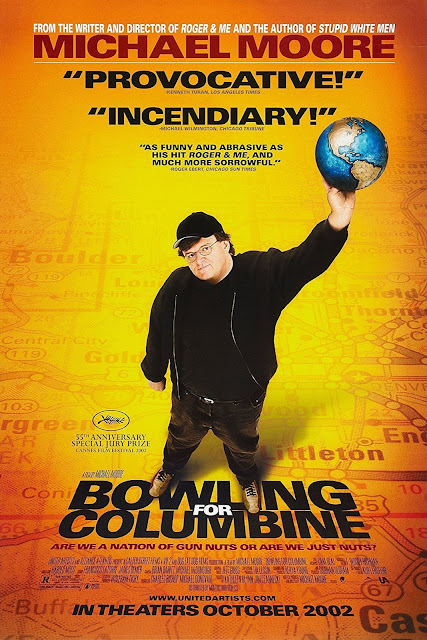 
215,000 students. 221 schools. Those are how many students & schools that have been impacted by a school shooting since Columbine. 428 of those students have either been killed or were injured. And to this day, not one single law has been passed to stop more of these events from occurring.

I've seen Bowling for Columbine several times since I first saw it at the age of 13, but I haven't had the opportunity to see it in theaters until a very good friend of mine posted on Instagram that the local chapter of her pro-gun control group, Students Demand Action, was teaming up with Moms Demand Action, former Genesee County Prosecutor Arthur Busch & 2 local Congressional candidates for the Democratic Party (Martin Brook & Suneel Gupta), was holding a screening of the film not far from me. And seeing it in theaters adds so much to the film. It's the best documentary of all time. The film follows writer, director, humorist, & political activist Michael Moore as he tries to figure out what makes our country so enthusiastic when it comes to guns.

Moore starts off in a Michigan bank, where after opening up an account, he is given a free hunting rifle. Afterwards, he meets with James Nichols, the brother of Terry Nichols, the co-conspirator of the Oklahoma City bombing, who believes that the government is tyrannical & says that he has a gun always under his pillow.

But why are we so trigger-happy? Moore looks into the culture of fear & looks at what causes gun violence. Moore notes the news media's infatuation with the "if it bleeds, it leads" mentality. Moore knows that many of the common causes happen in other countries as well, yet they have much lower rates of gun deaths. However, others believe it all started with one man: Marilyn Manson. In an interview, Moore asks why he was considered to be so influential to the young men who committed the mass shooting. Manson notes that President Clinton ordered more bombings on Kosovo on April 20, 1999 (the day of the Columbine shooting) than any other day during that war. Moore also looks into the poverty rate as a possible cause for gun violence, centering in on a story that hits too close to home for people in Southeast Michigan. But at the end of the day, it all traces back to Columbine.

Michael Moore's direction is phenomenal. Through his trademark mix of sharp, biting humor with shocking facts, Moore is able to strike a nerve with the audience.

This is not only the best documentary of all time, but sadly, over 16 years since its release in 2002, painfully relevant. It's a shame that it remains relevant, because too many people have died from gun violence in the almost 20 years since Columbine. We must heed the call. We must send people who will fight for common sense gun reform to office. We must protest. We must write & call our Congressional representatives. We must take action. The time is NOW.

Bowling for Columbine was seen by me at The Maple Theater in Bloomfield Township, MI on Sunday, July 15, 2018. It is available on Blu-ray & DVD from The Criterion Collection. Its runtime is 120 minutes, & it is rated R for some violent images & language (although I would recommend this film for people above the age of 15).
at July 25, 2018