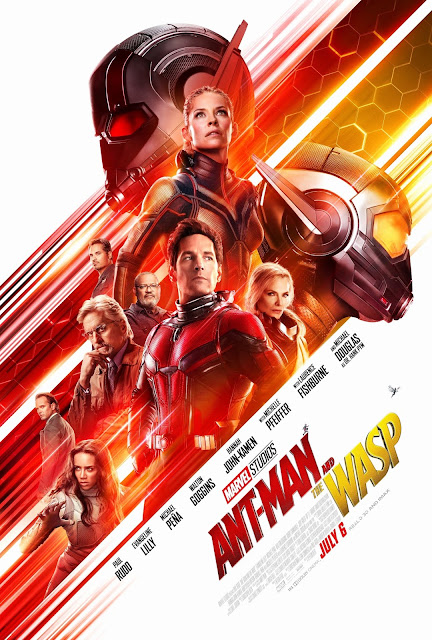 Ant-Man & the Wasp is more of the same, but better than the first. The film follows Scott Lang, AKA Ant-Man (played by Paul Rudd), who is eagerly awaiting the end of his house arrest sentence after the Germany incident (portrayed in Captain America: Civil War). As a result of this, Dr. Hank Pym (played by Michael Douglas) & his daughter, Hope van Dyne, AKA Wasp (played by Evangeline Lilly), have cut ties with Scott & gone into hiding. Lang tries to make the most of his house arrest by spending time with his daughter, Cassie (played by Abby Ryder Fortson), & working with his friend, Luis (played by Michael Peña) for a security team.

One night, Scott has a dream involving Dr. Pym's wife & Hope's mother, Janet van Dyne (played by Michelle Pfeiffer), who has been presumed dead after being stuck in the Quantum Realm since 1987. Janet sends Scott a message in the dream, & he was able to receive it because Dr. Pym & Hope opened a tunnel to the Quantum Realm. Scott contacts Pym, & is then kidnapped by Hope, who leaves a decoy in order to not arouse suspicion from the FBI. Believing that the message means she is alive, the three decide to find a part for the tunnel that is critical for retrieving Janet. Hope goes to see black market dealer Sonny Burch (played by Walton Goggins) to purchase the part, but the plan is thwarted due to Sonny's greed. Scott & Hope try & fight off Sonny & his crew, but a woman named Ava Starr, AKA Ghost (played by Hannah John-Kamen), who can go through walls due to her unbalanced atomic state, attacks Hope & escapes with Dr. Pym's portable lab, & therefore, the tunnel to the Quantum Realm.

In order to get it back, Scott, Hope & Dr. Pym talk to a former disgruntled colleague of Dr. Pym's, Dr. Bill Foster (played by Laurence Fishburne). But the road to getting the lab back & saving Janet is much bumpier than they may believe.

The cast is superb. Paul Rudd is effortlessly hilarious & charming at every turn. Evangeline Lilly builds off of the promise she showed with her character in the first film. And Michael Peña steals the show once again.

Peyton Reed's direction is excellent. Reed does a better job of controlling the tone & flow here than he did on the first film, & it marks a big leap forward in his career.

And the visual effects are stunning. The shrinking effects are better than the first film, but the scenes in the Quantum Realm are where the effects really shine.

This is definitely in the top-tier of the MCU. It's an improvement over the first film, & definitely gives us more of an idea about what will happen in Avengers 4 next year.