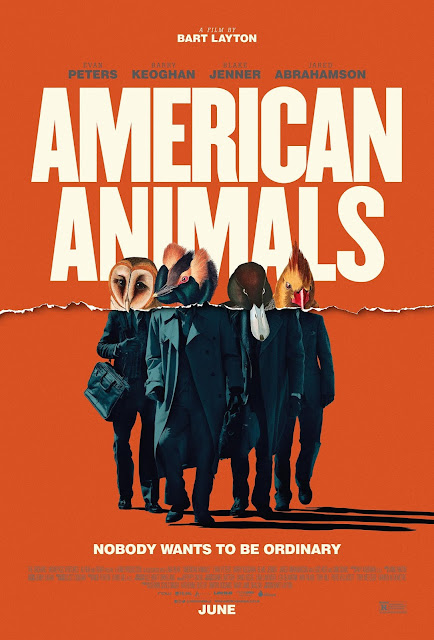 Except American Animals isn't based on a true story. It is a true story. It's flawed, but it's a very interesting true crime film. Set from 2003-2004, & interspersed with the real actual people, the film follows Spencer Reinhard (played by Barry Keoghan), an art student at Transylvania University in Lexington, Kentucky. Very nihilistic in nature, Spencer believes that something exciting needs to happen to him to make his life have meaning. His friend, Warren Lipka (played by Evan Peters), is also at Transylvania University on an athletic scholarship, but is blowing it off.

Spencer takes a tour through the school library, & sees the collection of rare books. Seeing this as an opportunity for something exciting to happen to him, Spencer decides to rob the book collection with Warren. Bewildered at first, Warren agrees to join him in the heist. During the planning, Warren flies to Amsterdam to meet with some Dutch buyers, led by Mr. Van Der Hoek (played by Udo Kier).

Realizing that the heist cannot be done with two people, Spencer & Warren recruit two other people for the heist: childhood friends Chas Allen (played by Blake Jenner) & Eric Borsuk (played by Jared Abrahamson). They discover that the only person keeping watch on the books is the special librarian, Betty Jean Gooch (played by Ann Dowd).

As the heist gets closer, they are very anxious & highly anticipating it. But this could be the very thing that tears all of them apart.

The cast is excellent. Keoghan is proving himself to be one of the best young actors working in film today. Peters builds off of the promise he showed on American Horror Story. And Jenner & Abrahamson do great work.

Bart Layton's direction is great. Although he does have some issues at times keeping everything on an even keel, for the most part, he does a great job, & shows a lot of potential. Also, I commend his decision to mix the real people with the actors.

And Bart Layton's screenplay is very good. Although the plot starts to falter in the less darkly comedic & less high-octane third act, the dialogue & characterization are both of high caliber.

This is a solid crime film. Although it is flawed, it is buoyed by a great cast & an interesting mix of real life & docufiction.

American Animals was seen by me at the Landmark Main Art Theatre in Royal Oak, MI on Friday, June 22, 2018. It is currently in 1 theater in the Detroit area: the Quality 16 in Ann Arbor, MI. Its runtime is 116 minutes, & it is rated R for language throughout, some drug use & brief crude/sexual material.
at July 18, 2018