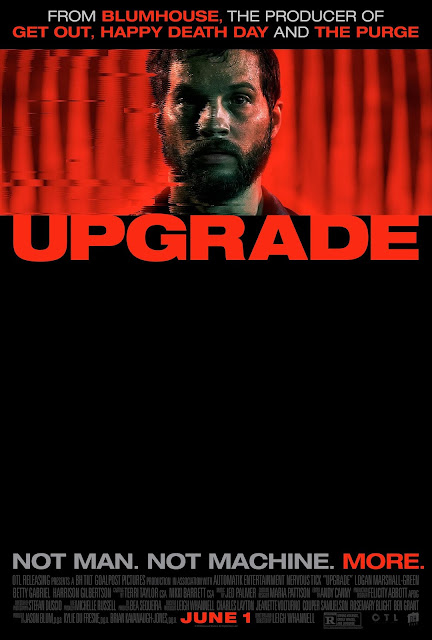 
B-movies, once very popular in the 1970s, have become all but extinct in our blockbuster-heavy society. Once guilty pleasures of audiences, they are now only shown at select midnight showings.


Upgrade is a somewhat flawed, but altogether fun sci-fi thriller throwback to the classic B-movies of the 1970s. Set in the near-future, the film follows Grey Trace (played by Logan-Marshall Green), a technologically skeptic mechanic married to Asha (played by Melanie Vallejo), who works for tech giant Cobolt. One night, they are invited to the house of Eron Keen (played by Harrison Gilbertson), a tech innovator for rival company Vessel. He introduces them to a new invention called STEM, which can connect to & improve anything.

On their way home, Grey & Asha get into an accident in their AI car, & are attacked by 4 men. They kill Asha & shoot Grey in his spinal cord, making him a quadriplegic. Depressed by the murder of his wife & the loss of his limbs, Grey becomes suicidal. However, Eron visits him in the hospital, in the hopes to convince Grey to have STEM implanted in him, thereby allowing him to walk again. Reluctant at first, Grey agrees.

The procedure is successful, but Grey must keep this secret. While looking through the case files of Asha's murder, he hears STEM (voiced by Simon Maiden) speaking to him, with only Grey being able to hear STEM. STEM identifies one of the people involved in Asha's murder as Serk (played by Richard Cawthorne), & Grey goes to his house to gather info. However, when Serk gets home, him & Grey get into a fight, which Serk is winning until Grey gives STEM permission to control his body for that moment. Grey then proceeds to manhandle him, & finishes it by viciously cutting into his jaw.

Det. Cortez (played by Betty Gabriel), who is investigating Asha's murder, notices footage of Grey near the crime scene & become suspicious. But as Grey gets deeper & deeper into finding the man who killed Asha, STEM begins to take more & more control.

The cast is superb. Logan Marshall-Green is great in the lead role, exuding so much power & intensity. Betty Gabriel & Harrison Gilbertson provide some great supporting work as well.

Leigh Whannell's direction is great. Although he fumbles a few times at juggling some tonal shifts, he manages to right most of the wrongs in the end. And he sure can direct some pretty gory action sequences very well.

Leigh Whannell's screenplay is good. Although the dialogue is cheesy & the story doesn't go where we'd like it to go at times, the plot is very intriguing.

And Felicity Abbott's production design is fantastic. The futuristic sets are so immersive & look so awesome, adding to the stylish atmosphere of the visuals.

This is a good B-movie. Although it's nowhere near perfect, it provides enough fun to make it worth the price of admission.

Upgrade was seen by me at the MJR Marketplace Digital Cinema 20 in Sterling Heights, MI on Saturday, June 2, 2018. It is in theaters everywhere. Its runtime is 100 minutes, & it is rated R for strong violence, grisly images, & language.
at June 11, 2018