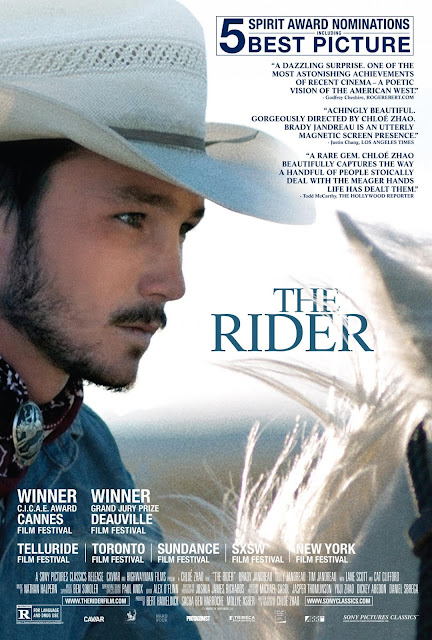 The cast of The Rider is entirely filled with non-professional actors. But that, in the end, is what makes the film so much more human & emotional. The film follows Brady Blackburn (played by Brady Jandreau), a young cowboy on the Pine Ridge Oglala Lakota Reservation in South Dakota. He lives in a trailer with his father, Wayne (played by Tim Jandreau), who is a gambler & an alcoholic that has always preached the mantra of manning up & being a cowboy, & his younger sister, Lilly (played by Lilly Jandreau), who is autistic. Brady & Lilly's mother had died not too long beforehand.

Once a rising star in the rodeo circuit, Brady suffered an accident during a rodeo, one that would've been relatively minor, had it not been for a horse stepping on his skull. Now suffering from seizures, he is warned that if he gets back on a horse, he could make his ailments worse, possibly paralyzing or killing him.

Now, without the one thing he loves, Brady finds himself stuck in a job at the grocery store. When he's not working, he's either helping out his family, hanging out with friends, seeking comfort in his best friend, Lane Scott (played by Lane Scott), who was once a rodeo star before he became paralyzed & unable to speak, or helping out another rodeo rider, Cat Clifford (played by Cat Clifford).

One day, Brady finds a horse named Apollo. Eventually, he decides to get back into rodeo, knowing that another fall may kill him. But that's the struggle for Brady: rodeo is the only thing he's ever known. And taking that from him is like taking away his ability to breathe.

The cast is fantastic. Brady Jandreau gives one of the best performances ever by a non-professional actor. He has such an enigmatic screen presence reminiscent of John Wayne & Gary Cooper. And if this is where the road takes him, then I can't wait to see what Jandreau will do next on the silver screen.

The rest of the cast, especially Tim & Lilly Jandreau, provide such amazing support to Brady Jandreau. Tim Jandreau's performance is as heartbreaking as his son's performance; tough, but still caring. And Lilly Jandreau provides some light-hearted moments to the film, making a performance that would've felt problematic with a trained actor feel so real & humorous.

Chloé Zhao's direction is phenomenal. Zhao met the cast while making her debut film Songs My Brother Taught Me in 2015. The film came to light for her once Brady Jandreau suffered a rodeo accident in 2016, exactly as he did in the film (real footage is shown in the film). Zhao then framed the film around his recovery. Other things in the film are real as well. Lilly Jandreau has autism in real life, & Lane Scott was a rodeo star before suffered brain damage in real life, albeit from different reasons in the film. But the film isn't a documentary, but rather life & art mixing together. And Zhao mixes those so spectacularly, making the emotional moments hit a lot harder.

Chloé Zhao's screenplay is masterful. The plot deals with some heavy themes very well. The characters are fleshed-out very well, even the small characters. And the dialogue is so real & raw.

And Joshua James Richards' cinematography is breathtaking. His camerawork is very reminiscent of the camerawork of the films of Terrence Malick, with the wide, majestic shots of the open frontier of the West. And Richards sure can shoot a film as good as those guys.

This is one of the best films of the year. It's a heartbreakingly beautiful story of the human condition & how we feel when something we love to do so much is taken away so suddenly.