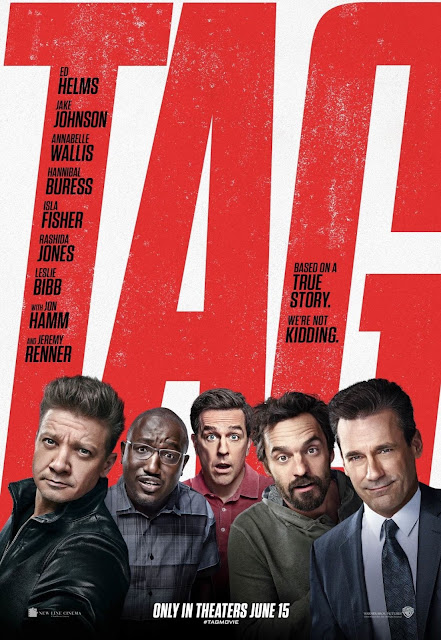 
Picture this: 10 guys playing a game of tag for one month every year for over 30 years. Sounds crazy, right? Well, it's real. And now it's a movie (albeit with a few differences).

Tag is that film. While it's a bit scattershot at times, it's an enjoyably funny comedy. Based on the 2013 Wall Street Journal article It Takes Planning, Caution to Avoid Being It by Russell Adams, the film follows 5 life-long friends: Hogan "Hoagie" Malloy (played by Ed Helms); Randy "Chilli" Cilliano (played by Jake Johnson); Kevin Sable (played by Hannibal Buress); Bob Callahan (played by Jon Hamm); & Jerry Pierce (played by Jeremy Renner). Since, they have played a month-long game of tag every May.

Hoagie tells Chilli, Kevin & Bob that this is their last chance to tag Jerry, as he has never been tagged in the history of their game. Jerry is retiring after this year due to his upcoming marriage to Susan Rollins (played by Leslie Bibb). Rebecca Crosby (played by Annabelle Wallis), a journalist for The Wall Street Journal who is doing a profile on Bob, also accompanies them, & so does Anna (played by Isla Fisher), Hoagie's wife.

When they go to their hometown to stake out Jerry, Susan sees them & sets out ground rules for the tag game: no tagging will be allowed during any wedding activities. This, along with the reappearance of the childhood crush of both Bob & Chilli, Cheryl Deakins (played by Rashida Jones), will end up causing some challenges in everyone's quest to tag Jerry.

The cast is amazing. Helms, Hamm, Johnson & Renner are great at comedy, as they always are. But the 2 standouts are Fisher, who is hilarious because of her character's cut-throat style; & Buress, who always has a perfect deadpan style.

Jeff Tomsic's direction is good. Although there are several flaws in the direction, they're normal for a first-time director, & especially for a comedy director.

And the screenplay by Rob McKittrick & Mark Steilen is great. Although some jokes fall, most of them do land, & some characters are really well-realized.

This is an overall good comedy. Although it has several flaws, it has enough going for it to make it a solid film.

Tag was seen by me at the MJR Marketplace Digital Cinema 20 in Sterling Heights, MI on Monday, June 18, 2018. It is in theaters everywhere. Its runtime is 100 minutes, & it is rated R for language throughout, crude sexual content, drug use & brief nudity.
at June 28, 2018