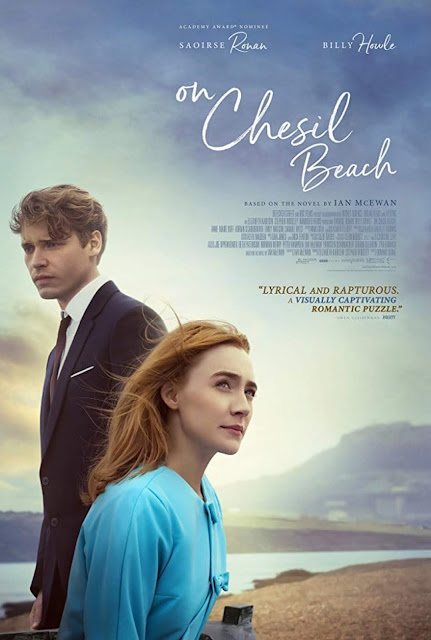 
Young love can be such a great thing. To find someone you love without a long wait is a crowning achievement & is something to be adored. However, some people rush into it too quickly, without fully pondering their future.

On Chesil Beach is a moving & beautiful film that deals with that dilemma. Based on Ian McEwan's 2007 novella of the same name, & set in 1960s England, the film follows Florence Ponting (played by Saoirse Ronan) & Edward Mayhew (played by Billy Howle), a young newlywed couple. They come from different backgrounds: Florence is an upper-class string quartet member, with her mother, Violet (played by Emily Watson), being a philosophy professor, & her father, Geoffrey (played by Samuel West), being a factory owner. Edward, on the other hand, is a middle-class man with a rash personality, with his mother, Marjorie (played by Anne-Marie Duff), suffering brain damage from an unfortunate train accident, & his father, Lionel (played by Adrian Scarborough), being an overworked headmaster.

They have just been married earlier in the day, & are honeymooning at a small hotel on Chesil Beach, in Dorset. Edward is eager to consummate the marriage, but Florence is nowhere near ready for it, although she is slowly trying to work herself up to the idea of it.

While they try to ease their way into it, they talk for a while about their lives, & flashback to how they met: they met at a meeting for the Campaign for Nuclear Disarmament, & eventually worked their relationship to where they are currently. But when they try to do it, the choices they make could leave their relationship on rocky waters.

The cast is superb. Saoirse Ronan gives another perfect performance. Ronan truly is the greatest actress of her generation. She can express so much with so little, & her gorgeous face can show so many emotions with only a slight change in her facial expressions. It's truly a shame how she doesn't have 3 Oscars by now.

Billy Howle also gives a fantastic performance. Howle has the bravado & acting power of a young Colin Firth. Every emotion he shows is infinitely strong, & has impeccable chemistry with Ronan.

Dominic Cooke's direction is excellent. Cooke, a noted theater director, has jumped over to the silver screen & has done a great job in his debut. Cooke gets everything right about McEwan's novel & the time period it encompasses.

Ian McEwan's screenplay is amazing. McEwan does a terrific job of adapting his novel, & the changes he makes in the adaptation don't damage the film at all.

And Sean Bobbitt's cinematography is breathtaking. Bobbitt captures the beauty of the beach, the English Channel, & the locales overlooking them so wondrously.

This is one of the best films of the year. It's a fantastic adaptation of a wonderful novella, led by two pitch-perfect performances.