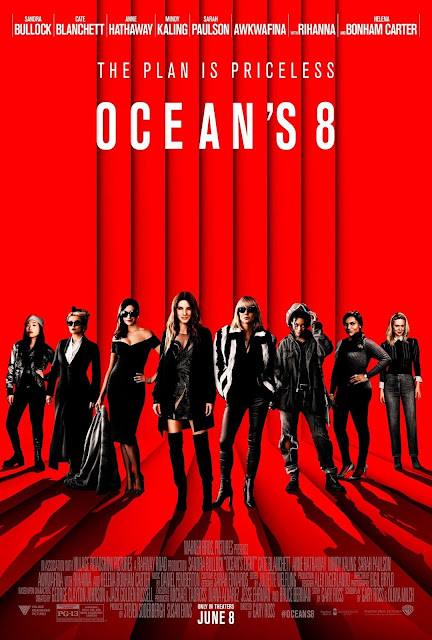 
The Ocean's Trilogy, altogether, was a breath of fresh air to the heist genre. Although the trilogy had some flaws, its wit, style, & performances were enough to make it a great trilogy.

Ocean's 8, the newest addition to the Ocean's franchise, while suffering from a couple minor flaws, is one of the best of the franchise. The film follows Debbie Ocean (played by Sandra Bullock), the sister of Danny Ocean. After being in prison for nearly 6 years, she is finally on parole.

After getting back to New York, she reunites with her partner-in-crime, Lou Miller (played by Cate Blanchett). Debbie tells Lou about what she had been planning in prison: a heist at the Met Gala. The heist: stealing a necklace called "The Toussaint," valued at $150 million. The necklace is going to be worn by actress Daphne Kluger (played by Anne Hathaway). Lou is skeptical of this, saying they would need 20 people; Debbie says they would only need 7. Lou eventually agrees to this.

They hire 5 people to participate in the heist: washed-up fashion designer Rose Weil (played by Helena Bonham Carter), who will be their key to get the necklace, as she will be Daphne's fashion designer for the Met Gala; jeweler Amita (played by Mindy Kaling); street hustler/pickpocketer Constance Wong (played by Awkwafina); hacker Nine-Ball (played by Rihanna); & profiteer Tammy (played by Sarah Paulson).

Eventually, the heist is set. And what they're in for could either make them as rich as can be, or imprisoned for a long time.

The cast is fantastic. Bullock, Blanchett & Hathaway are the highlights of the cast, all exuding command & dominance in their performances. The rest of the cast also provides great supporting work.

Gary Ross's direction is great. Although there are a couple rough spots when it comes to keeping everything interesting, Ross has enough style to make up for the flaws.

The screenplay by Gary Ross & Olivia Milch is amazing. The plot is intriguing, the characters are fantastic, & the dialogue is very clever.

And the editing by Juliette Welfling is excellent. The film is edited like much its predecessors: a lot of flashy quick cuts done to perfection.

This is a great addition to the Ocean's franchise. Although it isn't perfect, it has enough great details to make into a thoroughly engaging heist comedy.