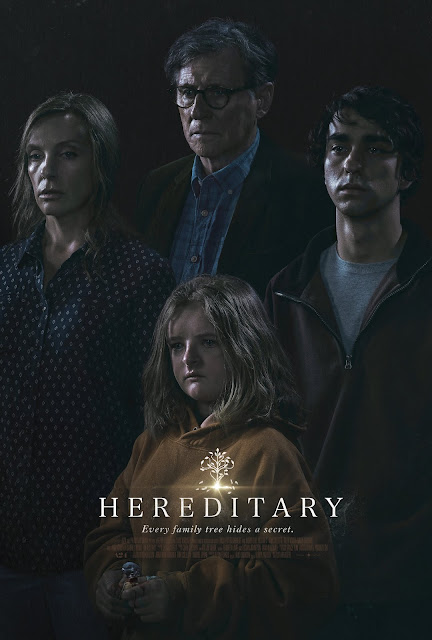 
I've said it before & I'll say it again: the horror genre has become way too washed out lately. An over-reliance on poorly-timed jump scares, along with a lack of characterization, has plagued the genre. Sure, there are a few films in recent memory that have gone against the clichés, but these are only a minute amount of exceptions, & not the rule.

Hereditary is a game-changer. It has brought back ideals of classic horror, using old-fashioned dread & a few perfectly-timed jump scares to become one of the greatest horror movies of all time. The film follows Annie Graham (played by Toni Collette), a miniature artist married to Steve (played by Gabriel Byrne). They have 2 children: Peter (played by Alex Wolff), a high-school burnout; & Charlie (played by Milly Shapiro), a 13-year-old outcast.

Annie's mother, Ellen, has recently died after a long illness. In an eulogy, Annie described her as a very secretive woman. Annie eventually finds herself at a support group, where she explains more about her family history of mental illness: her mother had dissociative identity disorder, her father was severely depressed & starved himself to death shortly before Annie was born, & her brother was schizophrenic, accused his mother of putting people in his body, & then committed suicide. At these meetings, Annie meets Joan (played by Ann Dowd), who lost both her son & grandson in an unfortunate accident.

Eventually, the family starts to encounter various horrific things in their lives & in their house. But as these events continue, their lives will inevitably fall apart, & they must wonder what Ellen was really involved with.

The cast is superb. Toni Collette has given the best female performance of the year so far. Her performance is a mix of several emotions: grief, terror, anger, etc. And she pulls them off so spectacularly. She has become the new scream queen, & she better get an Oscar nomination for Best Actress.

Alex Wolff is extroardinary. He is perfect as the aloof, slackerish teenager for the first third of the film, but by the end, he becomes a vicious force of terror & anger.

Milly Shapiro is astonishing, giving what is possibly one of the best child performances of the century. She has an insane power to unnerve the audience, & I know she's definitely going to go far after this.

Gabriel Byrne is remarkable. Byrne, who has been almost completely missing from the big screen in recent memory, gives a performance that is sure to rank at or near the top of all his performances, as he is also a powerful force of terror & anger here.

Ann Dowd is terrific. Dowd, known for her role on The Handmaid's Tale, starts her performance off as sympathetic, but becomes more terrifying by the minute.

Ari Aster's direction is excellent. Aster, fairly well-known for his shocking short films, has delivered a fantastic directorial debut. Aster builds up the dread every second, leading to a complete outburst of pure, unadulterated horror in the third act.

Ari Aster's screenplay is brilliant. The plot is so engulfing, the characters are well-developed, & the dialogue is tremendous. Never does the screenplay encounter any of those recent horror clichés, & that is something to be recognized, especially in this genre.

The editing by Jennifer Lame & Lucian Johnston is amazing. The film is paced very slowly, allowing the pure terror to slowly envelop & trap the audience in a nightmarish hell.

Grace Yun's production design is phenomenal. The set design, especially the set design of the house, is very creepy & dilapidated, making the set into an immersive house of horrors.

The sound design is impeccable. The sounds of the house are so creepy & terrifying, but there is one noise that is guaranteed to haunt you in your nightmares.

This is by far the scariest film I've ever seen in my entire life. It's a throwback to the classic horror films, &, in the process, has become a new horror classic.

Hereditary was seen by me at the MJR Marketplace Digital Cinema 20 in Sterling Heights, MI on Friday, June 8, 2018. It is in theaters everywhere. Its runtime is 127 minutes, & it is rated R for horror violence, disturbing images, language, drug use & brief graphic nudity.
at June 12, 2018