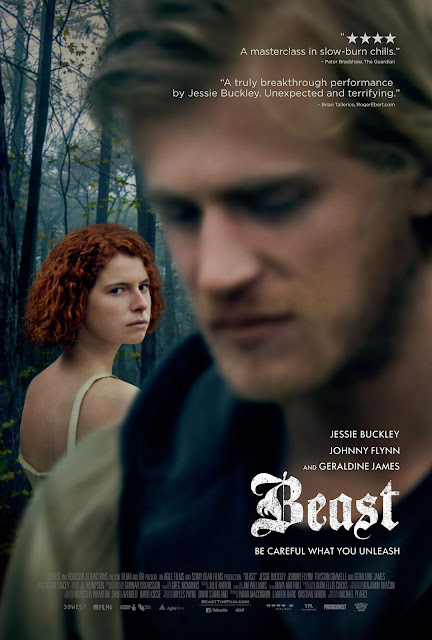 
In all of us, there's something yearning to be unleashed.

Beast shows us what can be unleashed & the consequences of that, becoming one of the best psychological thrillers in years. The film follows Moll Huntford (played by Jessie Buckley), a 27-year-old woman on the British island of Jersey. Terribly mistreated by her mother, Hilary (played by Geraldine James), & dubbed an outcast by the community, Moll finds herself stuck in her job as a tour guide.

On her 27th birthday, Moll is upstaged by her sister, Polly (played by Shannon Tarbet), who announces that she is having twins. Angered by this, Moll goes to a nightclub. The next morning, she meets Pascal Renouf (played by Johnny Flynn), a poacher. They are almost immediately smitten with each other. However, the community warns Moll about Pascal, as he is very mysterious.

While they start their romance, a killer is loose on Jersey. Multiple girls have gone missing & then found murdered. The people of Jersey turn their heads toward Pascal as a possible suspect, & also towards Moll because of her association with him. Moll must ponder on whether or not Pascal is the killer, & if so, whether or not she should still stay with him.

The cast is fantastic. Jessie Buckley gives the best female performance of the year so far. She plays her character with so much range, always feeling so alive & so vivid. Johnny Flynn also gives a great performance, also carrying a lot of range, but also a lot of repression in his performance. And Geraldine James is terrifically evil. She is "The Mother from Hell." She is so diabolical & so manipulative & so entertaining to see.

Michael Pearce's direction is excellent. This is one of the best directorial debuts in a while. Pearce keeps the tension high with something so small as a change in facial expression.

Michael Pearce's screenplay is amazing. The plot, story, characters & dialogue are all so intriguing, filled with so many chills, thrills & twists.

Benjamin Kracun's cinematography is gorgeous. The entire film is a visual spectacle, & it's helped a lot by Kracun's many wide-open shots of the beaches of Jersey & the open waters of the English Channel.

And Maya Maffioli's editing is superb. The film is very slow-paced, allowing the events & twists to slowly unfold, & also allowing the film to unnerve the audience.

This is one of the best films of the year. It's a spectacular psychological thriller, led by a terrific breakout performance from Jessie Buckley.

Beast was seen by me at the Landmark Main Art Theatre in Royal Oak, MI on Saturday, June 9, 2018. It is currently in 1 theater in the Detroit area: the State Theatre in Ann Arbor, MI. Its runtime is 107 minutes, & it is rated R for disturbing violent content, language & some sexuality.
at June 20, 2018