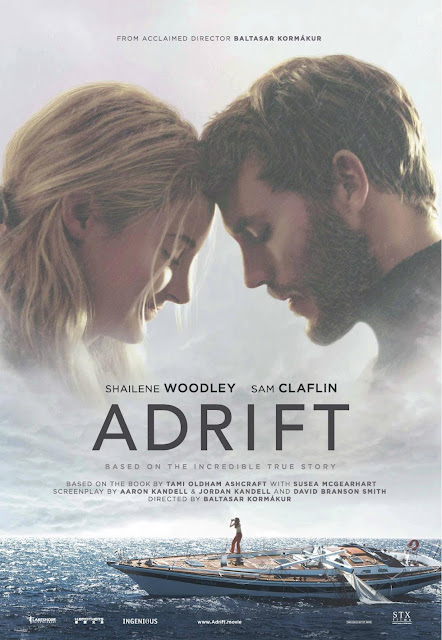 Adrift, while not completely fresh, is a really good survival film. Based on the 1998 book Red Sky in Mourning: The True Story of a Woman's Courage & Survival at Sea by Tami Oldham Ashcraft & Susea McGearhart, & set in 1983, the film follows Tami Oldham (played by Shailene Woodley), a world traveler from San Diego. She has made her way to the island of Tahiti in the Pacific Ocean. There, she meets Richard Sharp (played by Sam Claflin), a British sailor. Eventually, they start a relationship.

Eventually, Tami & Richard are asked to sail a yacht named Hazana from Tahiti to San Diego, which is Tami's hometown. At first, the journey is calm & uneventful. However, they eventually run into Hurricane Raymond, a massive Category 4 storm. They end up going straight into the hurricane.

After the hurricane, the damage to the boat is immense: the yacht is completely flooded, & the supplies in the boat are almost decimated. Richard's leg is badly injured. Now Tami must find their way back to land in order for both of them to survive.

The cast is excellent. Shailene Woodley's performance is terrific. Her character is filled with fear, despair, & anger, & Woodley portrays those emotions so well. Sam Claflin also turns in a great performance.

The screenplay by Aaron Kandell, Jordan Kandell & David Branson Smith is good. Although the narrative is a bit contrived, & the main romance is a bit underdeveloped, but the plot is still very intriguing.

And Robert Richardson's cinematography is fantastic. There are so many beautiful wide shots on the sea, & there's an excellent 3-minute long take that is one of the best of the year.

This is a very good film. Although it does have a few flaws, the film has a lot of great things in it, especially Shailene Woodley's performance & Robert Richardson's cinematography.

Adrift was seen by me at the MJR Marketplace Digital Cinema 20 in Sterling Heights, MI on Tuesday, June 19, 2018. It is in theaters everywhere. Its runtime is 96 minutes, & it is rated PG-13 for injury images, peril, language, brief drug use, partial nudity & thematic elements.
at June 28, 2018