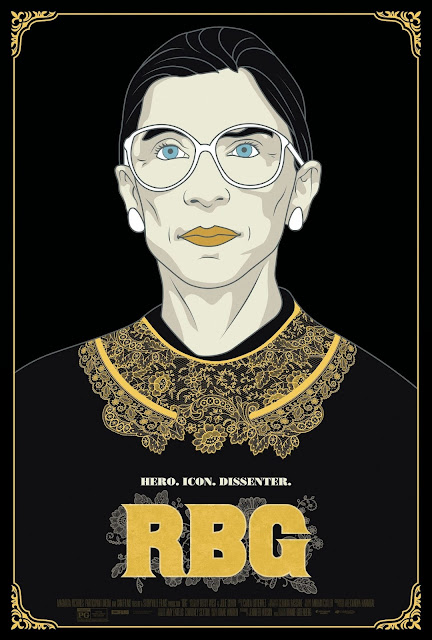 Ruth Bader Ginsburg is nothing short of an American icon. At 85, & having been a Supreme Court justice for almost 25 years, she has become a force to be reckoned with, noted for her striking dissents, sticking up for the oppressed in American society.

RBG goes into the life of Ruth Bader Ginsburg, & what results is a truly inspiring documentary of a modern American superwoman. The film follows Ruth Bader Ginsburg, an Associate Justice of the Supreme Court of the United States. It starts with her childhood in Flatbush, Brooklyn in a Jewish family. She graduated from James Madison High School, & attended Cornell University in Ithaca, New York. That was where she met Martin Ginsburg, who would eventually become her husband in 1954. They had 2 children: Jane & James.

She eventually attended at the law schools at Harvard & Columbia, & eventually became counsel for the American Civil Liberties Union (ACLU). In 1980, she was nominated by Jimmy Carter to a seat on the U.S. Court of Appeals for the District of Columbia Circuit; she was confirmed not long after that.

However, her biggest achievement came on June 14, 1993, when Bill Clinton nominated her for the Supreme Court of the United States. She was confirmed 2 months later. Since then, she has become more of a trailblazer for & defender of women's rights, & has been cemented into pop culture for her dissents & her surprising vitality, as she works out multiple times a week. She is nothing short of a fantastic woman & a remarkable role model for women.

The direction by Betsy West & Julie Cohen is excellent. They have nothing but the utmost respect for Ginsburg, & I admire that, just as much as I admire Ginsburg.

This is one of the best documentaries of the decade. It's an eye-opening & crowd-pleasing documentary of an American icon that will make you want to become just like her. All hail The Notorious RBG.