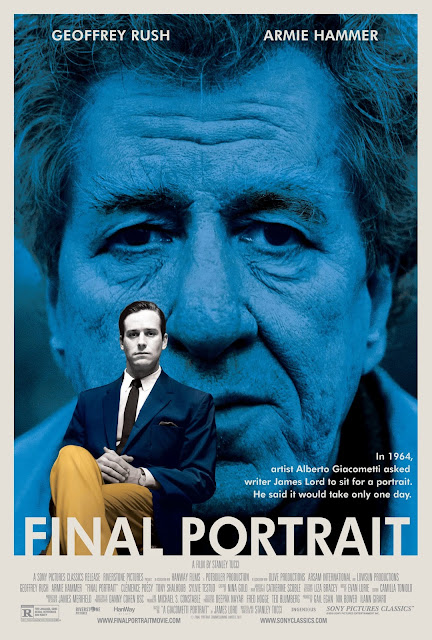 The life of an artist is not as easy as it may seem. It's grueling, stressful, & chaotic overall.

Final Portrait, while not perfect, is a charming & sometimes witty testament of the life of an artist. Set in 1964 Paris, the film follows Alberto Giacometti (played by Geoffrey Rush), a famed Swiss painter & sculptor. He asks his friend, American writer James Lord (played by Armie Hammer), to sit for a portrait. Alberto tells him it will only take a few hours at most. James agrees to the proposition.

As Alberto tries to start on the portrait, he finds a lot of trouble in even trying to get past the first stages of the painting. As a result, James has to push back his flight to New York. While waiting to get back, James meets some of the people in Alberto's everyday life: Alberto's wife, Annette (played by Sylvie Testud); Alberto's brother, Diego (played by Tony Shalhoub); & Alberto's mistress, Caroline (played by Clemence Poesy).

Eventually, one more day becomes two, & two becomes four, & four becomes a week. As the days go by, the frustration both in the art & the life become more apparent, as Alberto tries to make the portrait as perfect as possible, & as James tries to see the artistic genius in Alberto's work.

The cast is superb. Rush gives one of his best performances yet, channeling all the frustration & anger that an artist experiences while working on his art. Hammer also gives a great performance, also channeling a lot of frustration, albeit in a different way from Rush.

Stanley Tucci's direction is great. Although he doesn't manage to keep a steady hand throughout, as he doesn't maintain interest at points, he does manage to do a fine job at portraying the frustrations of artists in the midst of their work.

And Stanley Tucci's screenplay is remarkable. Although the story meanders & drags at times, the characters are well-written, & the dialogue features a lot of sharp wit.

This is a really good film about the mind of an artist. Although it does have several minor flaws, those flaws are overcome by clever dialogue & great performances, especially from Geoffrey Rush & Armie Hammer.

Final Portrait was seen by me at The Maple Theater in Bloomfield Township, MI on Saturday, April 28, 2018. It is currently in 1 theater in the Detroit area: the Michigan Theater in Ann Arbor, MI. Its runtime is 90 minutes, & is rated R for language, some sexual references & nudity.
at May 15, 2018