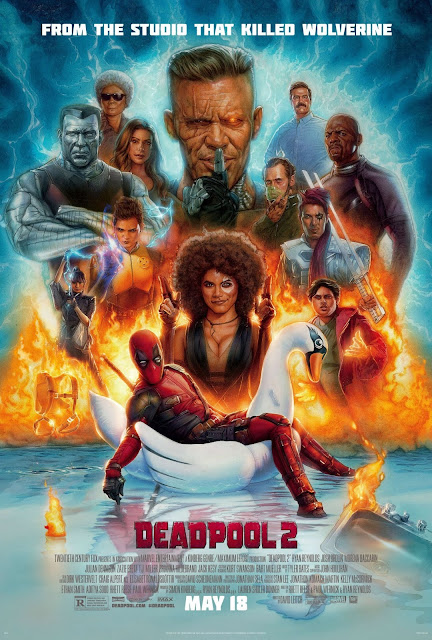 
When Deadpool came out in 2016, it was an absolute success. While becoming the highest-grossing R-rated film of all time (becoming more popular than Jesus (The Passion of the Christ) worldwide), it marked a fresh addition to the realm of superhero films. Although my opinion of the film has slightly lessened since then, it's still hilarious & doesn't take it self so seriously.

Deadpool 2 has done something most sequels (except The Godfather Part II, 22 Jump Street & Speed 2: Cruise Control) have not done: be better than the original. It's funnier, better-made, & more meta than the first. The film follows our favorite unkillable pansexual "Merc with a Mouth," Wade Wilson, AKA Deadpool (played by Ryan Gosl... no, wait, Ryan Reynolds), who is still fighting crime while wisecracking & continuing his relationship with Vanessa Carlysle (played by Morena Baccarin).

However, Wade finds himself alone again (naturally...), & has become severely depressed, with Weasel (played by T.J. Miller but should've been replaced with Christopher Plummer) & Dopinder (played by Karan Soni) unable to help him. However, his old blind friend, Blind Al (played by Leslie Uggams) imparts some wisdom on him: "You can't really live until you've died a little." So Wade does this, of course, by blowing himself up.

Colossus (played by Stefan Kapičić) finds Wade in his destroyed apartment, & brings him to the X-Mansion (which now has more X-Men because the film can afford it now). Negasonic Teenage Warhead (played by Brianna Hildebrand), still being her moody teenage self, is also there, now dating Yukio (played by Shioli Kutsana). Colossus allows Wade to finally join the X-Men (as a trainee!)

Wade's first mission: help control young chubby mutant Russell Collins, AKA Firefist (played by Julian Dennison) at an orphanage, AKA a mutant rehabilitation center run by The Headmaster (played by Eddie Marsan), who is tyrannical. The X-Men are able to stop them; however, Wade, realizing Russell has been abused at the orphanage, kills one of the orderlies (who looks like a hybrid between Jared Kushner & a clean-shaven John Waters), & gets himself sent to the Ice Box, a prison for mutants, along with Russell. While in the Ice Box, Wade & Russell are put in the same cell, & are met by cultural appropriationist Black Tom Cassidy (played by Jack Kesy), who is the strongest guy in there.

However, Cable (played by Thano... no, wait, Jonah He... no, wait, Josh Brolin), a time-traveling cybernetic soldier from the future, comes to the Ice Box in order to kill Russell, so that an older Russell won't kill his family. However, Wade prevents this from happening.

Wade finds his way back to Weasel & Dopinder (who has acquired a taste & desire for violence), & decides to create a new supergroup (that will be young enough to carry the franchise for 10-12 years). They find 6 recruits: Domino (played by Zazie Beetz), who has the (notably uncinematic, according to Wade) power of luck; Bedlam (played by Terry Crews), who can distort electrical fields; Shatterstar (played by Lewis Tan), who is an alien that can do everything better than humans; Zeitgeist (played by Bill Skarsgård), who has acidic vomit; Vanisher (played by ???? ????), who is invisible; & Peter (played by Rob Delaney), who just wanted to join because he saw the ad. Together, they will try to stop Cable from killing Russell, stop Russell from turning bad, & make many pop culture references while doing those things.

The cast is fantastic. Ryan Gosl... no, Ryan Reynolds is dynamite again, adding more nuance to his character while also maintaining a persona of a deeply broken man hiding his pain with humor. Josh Brolin also does a great job, having great chemistry with Reynolds & functioning excellently as the straight man (double entendre!) in the duo with Reynolds. Zazie Beetz is the breakout star here, with her character being such a badass. And Julian Dennison also gives a great performance, building off the promise he showed in Hunt for the Wilderpeople.

David "The Guy Who Killed the Dog in John Wick" Leitch's direction is excellent. Leitch is no stranger to action sequences, & he does some of his best ones here. Also, he is able to mix the comedy & action together without there being any jarring tonal shifts.

The screenplay by Rhett Reese, Paul Wernick & Ryan Gosl... no, Ryan Reynolds is brilliant. The plot is able to poke fun at the tropes of sequels (& its fellow superhero films & franchises), the characters are well-written, & the dialogue is absolutely freaking hilarious.

Jonathan "Cinematographer of Soul Plane" Sela's cinematography is amazing. The color palette here is more varied, & looks better than the grey color palette in Deadpool. Also, some of the shots are really great here.

And the makeup & hairstyling is phenomenal. The makeup is, once again, very transformative, especially with Wade, & it also works amazingly for a special cameo by a certain Hollywood big-shot who just can't help being saved in every movie he's in.

This is one of the best superhero films in recent memory, & certainly the funniest superhero film of all time. It manages to be one of the few sequels (along with The Dark Knight, Before Sunset, & Return to the Blue Lagoon) that is better than the original, fueled by an excellent cast, great direction, & an amazing screenplay.

Deadpool 2 was seen by me at the MJR Partridge Creek Digital Cinema 14 in Clinton Township, MI on Friday, May 18, 2018. It is in theaters everywhere. Its runtime is 119 minutes, & it is rated R for strong violence & language throughout, sexual references & brief drug material.
at May 30, 2018