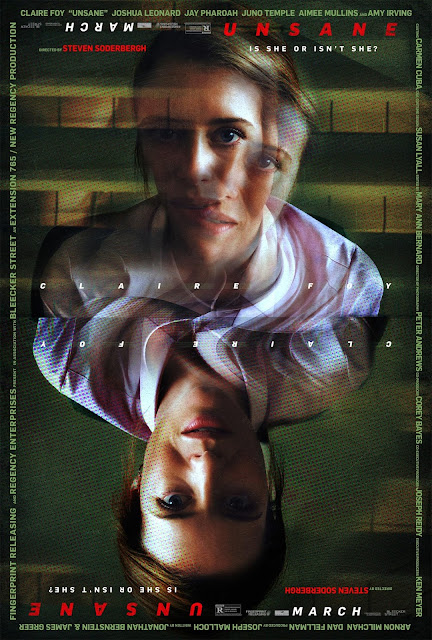 
If you look at Steven Soderbergh's career, you will find that it is very diverse. Soderbergh is best known for directing all 3 films of the Ocean's Trilogy, Erin Brockovich, & Traffic, for which he won the Oscar for Best Director. His more obscure films include Schizopolis, which was non-linear; Bubble, an unscripted film with non-professional actors; & Che, a 2-part biopic of Che Guevara.

Unsane definitely falls into the latter category. It's a fantastic psychological thriller that subverts many aspects of the genre. The film follows Sawyer Valentini (played by Claire Foy), a younger businesswoman starting a new job. She has started a new job in order to get away from her stalker, David Strine (played by Joshua Leonard), who has been stalking her for 2 years.

Seeking help, Sawyer joins a support group for harassment victims. When applying to join, she mentions that she had, in the past, contemplated suicide. After the consultation, she signs some documents. This leads to her being involuntarily committed to the Highland Creek Behavioral Center for 24 hours, headed by Ashley Brighterhouse (played by Aimee Mullins).

After an altercation with an aggressive patient, Violet (played by Juno Temple), Sawyer's stay is extended to a week. She finds herself alone at Highland Creek. However, she does find a friend in recovering addict Nate Hoffman (played by Jay Pharoah).

Eventually, Sawyer starts to see David around Highland Creek, believing it's him; however, no one else believes her. As she gets further into her stay, she goes as far as calling her mother, Angela (played by Amy Irving) to get her out. But as she sees more of the person she believes is David, we wonder: is she sane or isn't she?

The cast is excellent. Claire Foy gives an absolutely frightful performance, & shows that she is definitely a force to be reckoned with. Joshua Leonard is absolutely creepy as well.

Steven Soderbergh's direction is amazing. Soderbergh makes every single moment of the film intense, & adds a fresh feel to the psychological thriller genre.

The screenplay by Jonathan Bernstein & James Greer is brilliant. The plot has so many twists & turns, & is so disturbing & uncomfortable at times.

Steven Soderbergh's cinematography (under the name Peter Andrews) is fantastic. Shot on an iPhone 7 Plus, the film has better visual style than any video ever shot on any phone, let alone an iPhone. The camerawork from the iPhone 7 Plus also adds a claustrophobic feel, heightening the tension, & some of the shots are very reminiscent of The Shining.

And Steven Soderbergh's editing (under the name Mary Ann Bernard) is phenomenal. The film is tightly paced, & heightens the tension.

This is one of the best films of the year. Claire Foy is outstanding, & Steven Soderbergh makes us feel tense & disturbed at every turn.