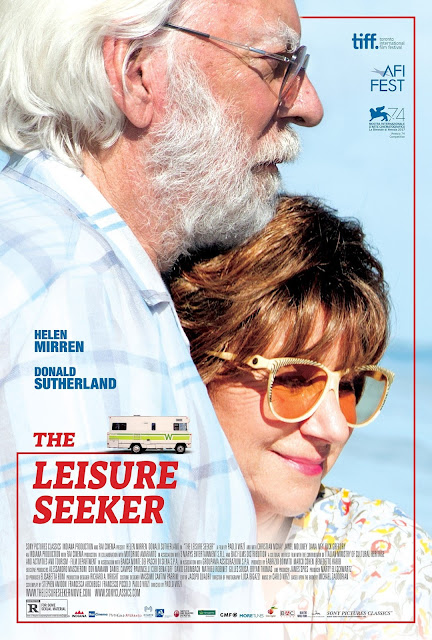 Great acting can only go so far in a film. Even if you had some of the greatest actors all in one film, even they might not be able to save the film without some serviceable direction & at least decent screenwriting,

And that hasn't been more evident in a long time than it is in The Leisure Seeker, a well-acted, but very disappointing comedy-drama. Based on the 2009 novel of the same name by Michael Zadoorian, & set in August 2016, the film follows Ella (played by Helen Mirren) & John (played by Donald Sutherland) Spencer, a Massachusetts couple in their 70s. Both suffer from different illnesses; Ella suffers from an unspecified type of cancer, while John, a former literary scholar & professor, suffers from Alzheimer's disease.

Looking for one last time together before their illnesses ravage them even more, Ella & John take a trip from the suburb of Beverly, Massachusetts to Ernest Hemingway's house in the Florida Keys in their 1978 Winnebago they call The Leisure Seeker. They do this without alerting their adult children, Jane (played by Janel Moloney) & Will (played by Christian McKay), or their neighbor, Lillian (played by Dana Ivey).

On the way, they encounter Clinton rallies, Trump rallies, big families, & some great burgers. But as their road trip gets closer to its destination, & as their illnesses get even worse, secrets start to arise to the surface, along with some delusions about an old friend, Dan Coleman (played by Dick Gregory).

The cast is great. Mirren & Sutherland, some of film's finest actors, are both excellent here. However, the supporting cast, aren't as great, but their characters weren't that well-developed.

Paolo Virzì's direction is mediocre. Virzi tries to juggle some jarring tonal shifts & balance comedy & drama, but fails miserably. He tries his hardest, but it was nowhere near where it should've been.

And the screenplay by Paolo Virzì, Francesca Archibugi, Francesco Piccolo & Stephen Amidon is terrible. The story is very saccharine & very predictable, & doesn't do a good job of adapting from the novel. Also, the film tries to add some political context, which doesn't affect the plot at all.

This is a very disappointing film. Although Mirren & Sutherland are excellent, nothing else about this film is excellent. This film should've been so much better.

The Leisure Seeker was seen by me at The Maple Theater in Bloomfield Township, MI on Friday, March 30, 2018. It is currently in 6 theaters in the Detroit area, including the AMC Forum 30 in Sterling Heights, MI, the AMC Star Great Lakes 25 in Auburn Hills, MI, the Emagine Novi in Novi, MI, & the Michigan Theater in Ann Arbor, MI. Its runtime is 113 minutes, & it is rated R for some sexual material.
at April 16, 2018