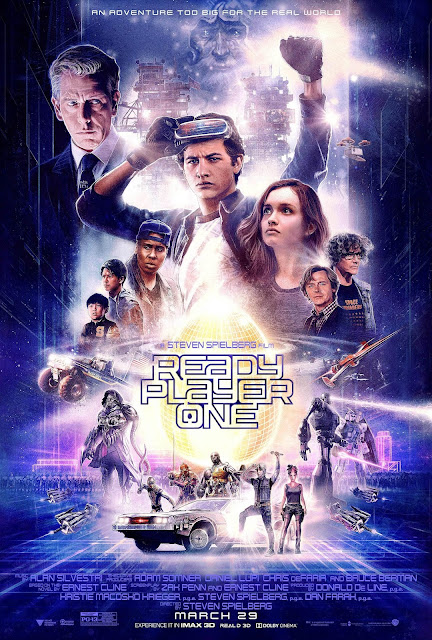 When it comes to blockbusters, Steven Spielberg is the man. He practically invented them. From Jaws, Close Encounters of the Third Kind & Raiders of the Lost Ark to E.T. the Extra Terrestrial, Jurassic Park & War of the Worlds, Spielberg is your go-to-guy for a good, old-fashioned blockbuster that will knock your socks off.

Ready Player One is nothing short of a fantastic blockbuster, & ranks up with some of Spielberg's best. Based on the 2011 novel of the same name by Ernest Cline & set in 2045 Columbus, the film follows Wade Watts (played by Tye Sheridan), an 18-year-old orphan living with his aunt, Alice (played by Susan Lynch) & her boyfriend, Rick (played by Ralph Ineson) in a working-class area of Columbus called "The Stacks." Wade spends most of his time in the Ontologically Anthropocentric Sensory Immersive Simulation (OASIS), a virtual reality world where people can work, go to school or entertain themselves. The OASIS was created by James Halliday (played by Mark Rylance) & Ogden Morrow (played by Simon Pegg), who had left the OASIS some years prior.

Recently, Halliday died. In a video made shortly prior to his death, Halliday states that he has left an Easter egg in the OASIS in a game called Anorak's Quest. The first to find the Easter egg will gain control of the OASIS. Many people, called "Gunters" (egg hunters), are going after it, along with video game corporation Innovative Online Industries (IOI), headed by CEO Nolan Sorrento (played by Ben Mendelsohn), going so far as building a large group of Gunters called "Sixers" to go after it. However, no one has even made it past the first task: a large obstacle course race through New York.

Wade, under his avatar name, Parzival, is one of these Gunters, partnering up with Aech (played by Lena Waithe) most of the time. During the first race, he encounters Samantha Cook, AKA Art3mis (played by Olivia Cooke), a very famous Gunter, & saves her from being zeroed (having her progression wiped out). Together, the three of them, along with two other Gunters, team up as the High Five. But mercenary gamer i-R0k (played by T.J. Miller), Sorrento, & the rest of IOI are after them in their quest for control of the OASIS, & will stop at nothing to destroy them.

The cast is amazing. Sheridan is great. Mendelsohn is fantastic, showing he is severely underrated. Pegg is also great, showing a vast improvement on his American accent from his horrendous use of it in 2006's Big Nothing. Waithe also provides some great comic relief. But the 2 greatest performances from the film are from Olivia Cooke, who gives an excellently nuanced performance proving she is one of the best young actresses of her generation, & Mark Rylance, who is also perfectly nuanced, cementing himself as one of my favorite actors. (However, although he was great, I would've replaced T.J. Miller, considering his recent sexual assault allegations & his recent indictment of making a false bomb threat, with another comedic actor).

Steven Spielberg's direction is excellent. Spielberg still knows how to direct a blockbuster. His sense of childlike wonder is still so fresh & exciting.

The screenplay by Ernest Cline & Zak Penn is brilliant. They do a fantastic job of adapting from the source material, while also writing some great characters & also some great, & at times, hilarious dialogue. And their use of cultural references is so awesome.

Janusz Kamiński's cinematography is astounding. Every shot is gorgeous, especially the shots inside the OASIS, which are just absolutely perfect.

The editing by Michael Kahn & Sarah Broshar is excellent. The film is very fast-paced, & is also cut very well, unlike most modern blockbusters.

The sound design is incredible. Every action scene has fantastically loud sound design, especially the race scene, that has some of the best sound design of the decade.

And the visual effects are spectacular. The CGI is some of the best of the decade, & there is not a single false note in these effects.

This is one of Spielberg's best blockbusters. It's visually stunning, feverishly paced, & incredibly well-acted.

Ready Player One was seen by me at the MJR Marketplace Digital Cinema 20 in Sterling Heights, MI on Thursday, March 29, 2018. It is in theaters everywhere. Its runtime is 140 minutes, & it is rated PG-13 for sequences of sci-fi action violence, bloody images, some suggestive material, partial nudity & language.
at April 16, 2018