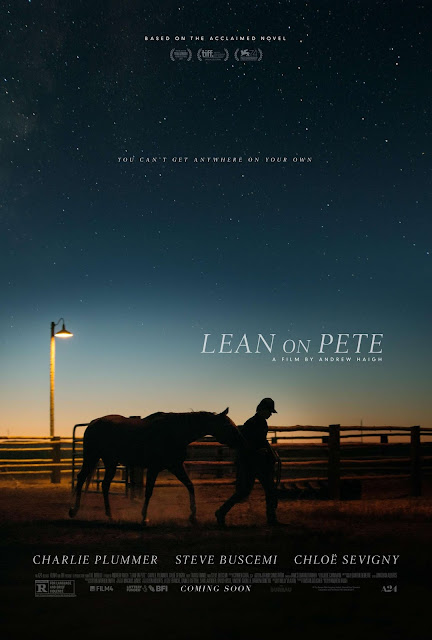 
Although the United States is supposedly the greatest country in the world, many people in this country still live in squalor, unable to pull themselves up because we haven't given them the tools they need to do so.

Lean on Pete is a story of such people, & is one of the most beautiful films of the year. Based on the 2010 novel of the same name by Willy Vlautin, the film follows Charley Thompson (played by Charlie Plummer), a 15-year-old boy living with his father, Ray (played by Travis Fimmel) in the Pacific Northwest. His mother walked out when he was young; despite this, Ray tells Charley that deep down, she most likely still loves him.

During the summer, Charley gets a job at a horse racetrack. There, he meets the rough & tough owner, Del Montgomery (played by Steve Buscemi) & a jockey, Bonnie (played by Chloë Sevigny). They both warn Charley not to get attached to the horses, as they're not pets.

However, Charley does get attached to one horse: a horse named Lean on Pete. When he finds out he's destined for slaughter, Charley breaks Lean on Pete out of the stables, & the two of them set out on a journey to Wyoming. But the hardships they face along the way are worse than they could have ever imagined.

The cast is fantastic. Charlie Plummer is an absolute revelation. His performance is so raw & realistic. Steve Buscemi also does a great supporting job. And it's nice to see Chloë Sevigny in a film again, after what felt like a long time. But this is Charlie Plummer's film, & he runs with it. He's going to go far, & I can't wait to see what he does next.

Andrew Haigh's direction is excellent. His direction is subdued & quiet, like his direction for his 2 previous films, 2011's Weekend & 2015's 45 Years, which I have yet to watch but do own & have heard nothing but great things about them.

Andrew Haigh's screenplay is amazing. The dialogue feels so human, & the characters are so well-written, even down to the ones we don't see for more than a few minutes.

And Magnus Joenck's cinematography is stellar. His camerawork quietly captures the serene atmosphere of the adventure Charley goes on, & makes every shot look like a majestic mural.

This is one of the 3 best films of the year. It's a beautifully-made & seldom-told story about some downtrodden people who need help but have never received it. It's a tough & emotional watch, & wasn't what I expected it to be, but I loved where it went & it's worth the onslaught of emotions that will come over you.