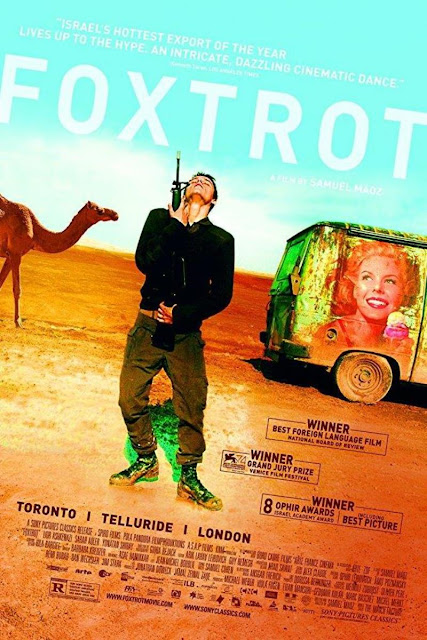 
The turmoil in Israel has been ongoing for years, with no end in sight. It is mainly of their own creation, due to their vicious, almost genocidal treatment of the Palestinian people. While I do not blame the Israeli people for this, but I do blame their horrific government.

Foxtrot is a well-made film that criticizes the Israeli government, framing it around a small, simple story. The film follows Michael (played by Lior Ashkenazi) & Daphna (played by Sarah Adler) Feldman, a upper-middle class couple in Tel Aviv. The have 2 children: a daughter, Alma (played by Shira Haas); & a son, Jonathan (played by Yonathan Shiray), who is serving his required duty in the Israeli Defense Forces.

One day, members of the IDF knock at their door. Daphna answers it, & what she hears sends her into shock: Jonathan has been killed in the line of duty. While Daphna is sedated due to the shock, Michael is sent into fury, viciously angered by the series of events.

Flashbacks reveal Jonathan's time in the IDF before he was killed. Jonathan & 3 other men served at an outpost at a border crossing. Their job is to check the border when people cross. They use an old van for their radio transmissions & a sinking storage bin for their sleeping quarters. Their time is very uneventful, telling stories from their childhood & waiting for the occasional camel to cross. But on one night, one mistake could destroy Jonathan's life, along with the rest of his troop.

The cast is fantastic. Lior Ashkenazi, who has been one of Israel's best actors in recent memory, is phenomenal. He's volatile in some parts, subdued in others, reflecting his shock & awe in his grief-stricken state. Sarah Adler is also great, & has some great chemistry with Ashkenazi.

Samuel Maoz's direction is excellent. Maoz mixes many powerful themes, & frames every single scene so perfectly. The best part of his direction is his slight change in the 3-act structure: the first & third acts are very realistic, but the second act is more surreal, & this is where Maoz becomes his most scathing of the Israeli government.

And Samuel Maoz's screenplay is brilliant. There are a number of shocking twists in the film, creating a completely unpredictable narrative. But a big surprise in the screenplay is the biting satirical humor, mainly in the second act.

This is one of the best foreign films of the decade. Also, this film was notable in Israel for its critique of the Israeli government, receiving scorn from higher ups in the government. However, it was named Best Picture at Israel's Ophir Awards, sending the film as the Israeli entry for Best Foreign Language Film at the Oscars (it did not receive a nomination, but made the final shortlist). I personally would've nominated this, as I think it was the best foreign language film of 2017.